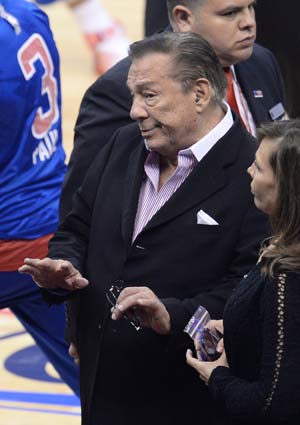 Johnson, who won five NBA titles with the Los Angeles Lakers, told CNN anchor Anderson Cooper that he believed Sterling's attack on him in a prior interview was the result of desperation in the face of the racism row that has engulfed him.

"It is not going to happen," Johnson said.

"The problem is, he's living in the stone ages," Johnson added. "He can't make those comments about African Americans or Latinos, he just can't do it."

Sterling spoke to Cooper in an interview that aired on Monday, trying to quell the controversy that erupted on April 26 when his comments to a girlfriend advising her not to associate with black people in public provoked nationwide outrage.

However, Sterling only fueled the fire when he attacked Johnson, saying the Hall of Famer was a poor role model because he had contracted HIV and suggesting he had not used his fame or fortune to help fellow African Americans.

Johnson addressed both issues, noting that as a businessman he'd worked to create jobs in urban neighborhoods and also worked with other prominent African Americans such as filmmakers Spike Lee and Tyler Perry to pass the skills of success to others in their community. 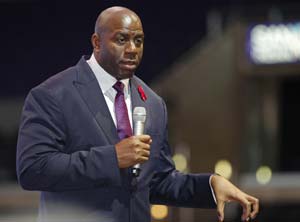 Johnson also found it disturbing that Sterling used the fact of Johnson's HIV status -- at one point mistakenly saying he had AIDS -- "like a club to wield against you."

Johnson noted that when he learned he had HIV, he quickly went public, and he has since worked to erase the stigma still attached to HIV and AIDS.

"I understood what I did was wrong, OK? So I announced that to the world, and I hope that I was able to help people in doing that," Johnson said.

While he felt compelled to respond to Sterling, Johnson said the attacks on him were misplaced.

He said Sterling's anger would be better directed at V. Stiviano, the young woman who angered Sterling by posting a photo of herself with Johnson at a sports event on Instagram.

"I don't know the young lady, barely know Donald," Johnson said. "So now I'm caught in the middle of this love affair or whatever they have," he said.

NBA Commissioner Adam Silver -- who leapt to Johnson's defense on Monday night with a personal apology -- has already banned Sterling for life from league activities and fined him $2.5 million.

It will take a vote of 75 percent of the remaining 29 owners to force Sterling to relinquish the club, which is expected to fetch upwards of $600 million if sold.

The process of getting to such a vote continues to inch forward, NBA spokesman Mike Bass indicated on Tuesday in a statement that showed the league is keeping close tabs on Sterling and his wife Shelly.

"The Advisory/Finance Committee met again this afternoon via conference call," Bass said in a statement.

"The Committee discussed the recent media appearances by Donald Sterling and Shelly Sterling, received updates on the hiring of Dick Parsons as the Los Angeles Clippers interim CEO and on his meeting yesterday with Clippers employees, and reviewed the status of the charge for termination of the Clippers' ownership.

"The Committee will reconvene next week."