Luol Deng hit a follow-up shot at the buzzer in overtime and the Chicago Bulls beat the Toronto Raptors 102-101 on Saturday night to clinch a playoff spot with their NBA-leading 40th victory. 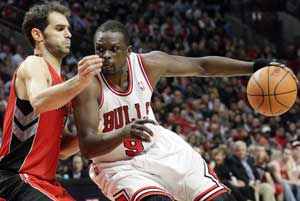 Luol Deng hit a follow-up shot at the buzzer in overtime and the Chicago Bulls beat the Toronto Raptors 102-101 on Saturday night to clinch a playoff spot with their NBA-leading 40th victory.

Chicago's C.J. Watson drove for the basket and Toronto's James Johnson blocked the attempt, but Deng got the ball and put it in the basket - a play official reviewed to make sure it was in before the buzzer.

Johnson, a former Chicago player, scored 20 points for Toronto. Jose Calderon also had 20 points and 10 assists, and Gary Forbes had 12 points and 13 rebounds for the Raptors, but missed two free throws with 6.4 seconds left in overtime.

At New York, Tyson Chandler had 15 points and equalled a season high with 17 rebounds as New York rebounded from its first loss under Mike Woodson to rout Detroit for the third time this season.

Amare Stoudemire scored 17 points for the Knicks, who are 6-1 since Mike D'Antoni resigned. They lost 96-79 on Friday night in Toronto, but had no trouble with Detroit for the third time in three meetings this season.

Carmelo Anthony finally got his shot to fall in the third quarter and finished with 15 points, while Jeremy Lin had 13.

Randy Foye had 18 points to help the Clippers, playing the first of five home games in eight days, move within three games of the Lakers for the Pacific Division lead.

Zach Randolph had 14 points and eight rebounds for Memphis. The Grizzlies have lost six of eight after an 11-2 stretch.

At New Orleans, DeJuan Blair scored 23 points and Tim Duncan had four key points down the stretch in the San Antonio's victory over New Orleans.

Jarrett Jack had 27 points for the Hornets, 25 in the first three quarters. He also committed a turnover and missed a driving layup in the final 32.7 seconds. Duncan finished with 13 points and seven rebounds.

At Washington, Joe Johnson scored nine of his 16 points in the fourth quarter, including a go-ahead 3-pointer in the final minute, as Atlanta erased a 16-point deficit to beat Washington.

Nene led the Wizards with 21 points and 11 rebounds for his 80th career double-double, and Jordan Crawford scored 20 points. Washington's John Wall missed a potential tying 3-pointer right before the buzzer.

Shawn Marion had 12 points and a season-high 15 rebounds to help the Mavericks beat Houston for the fifth straight time. Goran Dragic scored 24 points, and Luis Scola added 19 for the Rockets.

The game had 17 lead changes, 15 ties and a louder-than-usual crowd with the in-state rival in town.

At Milwaukee, George Hill scored a season-high 24 points in Indiana's victory over Milwaukee.

Roy Hibbert added 16 points and nine rebounds to help the Pacers rebound from a home loss to Phoenix.

The game included a minor confrontation in the fourth quarter between Milwaukee's Mike Dunleavy, a former Pacers player, and Indiana's Tyler Hansbrough.

DeMarcus Cousins had 28 points and 18 rebounds for the Kings.

At Newark, New Jersey, Deron Williams had 19 points and matched his season high with 14 assists as New Jersey beat Charlotte to snap a five-game losing streak.

Kris Humphries added 20 points and 16 rebounds, and former Bobcat Gerald Wallace had 15 points to help the Nets sweep the four-game season series with the woeful Bobcats.

Backup center Byron Mullens had 17 points to lead the Bobcats, who were coached by assistant coach Stephen Silas. Head coach Paul Silas has handed the team over to his son for three full games this season.