The Los Angeles Lakers responded to coach Mike Brown's firing earlier on Friday with an emphatic 101-77 victory over the Golden State Warriors. 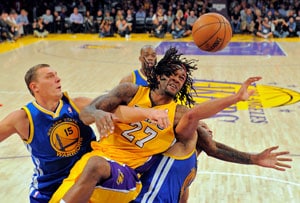 The Los Angeles Lakers responded to coach Mike Brown's firing earlier on Friday with an emphatic 101-77 victory over the Golden State Warriors.

Kobe Bryant scored 27 points, and Pau Gasol added 14 points and 16 rebounds for the Lakers, who had just a few hours to absorb Brown's dismissal after just 18 months in the job. Following a bumpy first half under interim coach Bernie Bickerstaff, they pulled away in the third quarter with a 25-9 run led by Bryant, who also had nine rebounds and seven assists.

Stephen Curry scored 18 points for the Warriors, who have lost five straight to the Lakers overall.

The comfortable victory doubled the Lakers' victory total for the season and capped one of the most tumultuous days in recent history for a franchise that's never short on drama. General manager Mitch Kupchak and owner Jim Buss abruptly dismissed Brown, informing the players during their morning shootaround.

LeBron James scored 21 points at Atlanta, , including the clinching jump shot with 13.6 seconds remaining, as the Miami Heat earned their fourth straight win with a 95-89 victory over the Hawks.

Jeff Teague hit consecutive 3-pointers as the Hawks rallied from a nine-point deficit in the fourth quarter. But Josh Smith missed two free throws with just over a minute remaining, and James finished off Atlanta after the teams traded turnovers.

Teague paced the Hawks with 20 points and 11 assists.

New York's Carmelo Anthony scored 31 points as the Knicks improved their best start in nearly two decades to four wins and no losses in a 104-94 home win over the Dallas Mavericks.

Reserve JR Smith added 22 points for the Knicks, the only unbeaten team in the NBA. They hadn't been perfect after four games since the 1993-94 team started 7-0 en route to the NBA Finals.

O.J. Mayo scored 23 points for the Mavericks, who had their three-game winning streak snapped and lost to the Knicks for just the fourth time in the last 22 meetings.

Anthony Davis had 23 points, 11 rebounds and five blocks in his first game back after a concussion to lead the New Orleans Hornets past the Chartlotte Bobcats 107-99, while Shannon Brown scored 12 of his 22 points in the fourth quarter and helped key a late 14-4 run as the Phoenix Suns rallied from a 26-point deficit to beat the Cleveland Cavaliers 107-105.

At Boston, Evan Turner scored 25 points and Jrue Holiday added 21 as the Philadelphia 76ers held off several fourth-quarter rallies to hold out the Celtics 106-100.

In other games; the Minnesota Timberwolves edged the Indiana Pacers 96-94, the New Jersey Nets downed the Orlando Magic 107-68, the San Antonio Spurs defeated the Sacramento Kings 97-86, the Oklahoma City Thunder beat the Detroit Pistons 105-94, the Denver Nuggets earned a 104-85 home win over the Utah Jazz, the Memphis Grizzlies were 93-85 winners over the Houston Rockets and the Milwaukee Bucks rallied for a 101-91 win over the Washington Wizards.

Comments
Topics mentioned in this article
NBA MS Dhoni Kobe Bryant Rafael Nadal Tiger Woods
Get the latest Cricket news, check out the India cricket schedule, Cricket live score . Like us on Facebook or follow us on Twitter for more sports updates. You can also download the NDTV Cricket app for Android or iOS.