Slammed for allegedly making shocking racist remarks, those who have followed him closely reveal that Donald Sterling has a reputation of being in the news for the wrong reasons.

Donald Sterling has been known to heckle his own team from the center-court seat where he has sat for decades, whether with his now-estranged wife or women young enough to be his granddaughters.

Former Los Angeles Clippers say the owner would barge into the locker room to berate players, offer awkward praise or - according to testimony in a lawsuit filed by his fired general manager - tell guests to check out his players' "beautiful black bodies." 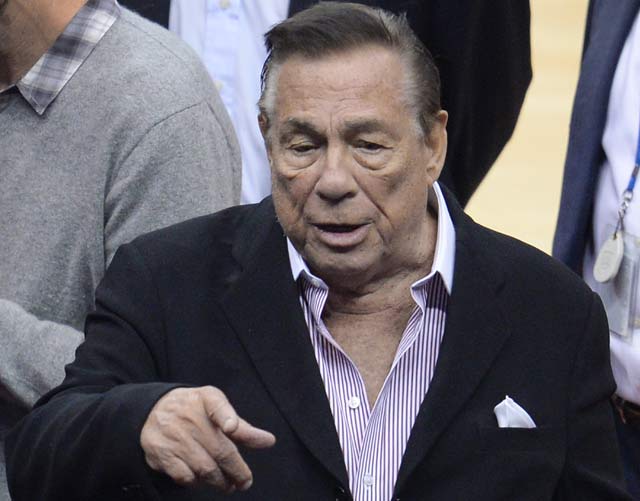 The NBA's longest-tenured owner is among the least successful in basketball history. He has watched the Clippers became a profitable punch line, compiling the worst record in North American pro sports during his first quarter-century in charge.

He has fired loyal coaches, waged court battles with long-serving executives and publicly seethed when players didn't want to stay with the team.

And that's only what Sterling does when the world can see him.

Opponents say the racially incendiary remarks attributed to Sterling and leaked to TMZ last weekend publicly show a side of the 80-year-old real-estate mogul that has been ignored and rationalized for years.

"It put a smile on my face that finally he would be unable to deny the racist allegations against him," said Carl Douglas, a lawyer who represented former Clippers general manager Elgin Baylor in a lawsuit against Sterling.

"This is a guy who, as the owner, sits courtside at the half-court line," Douglas added. "No other owner sits like that. He has an ego the size of the Grand Canyon."

Sterling has faced extensive federal charges of civil rights violations and racial discrimination in business, making shocking race-related statements in sworn testimony before reaching multimillion-dollar settlements. He has also been sued for sexual harassment by former employees, and the court proceedings detailed an outlandish list of Sterling's personal proclivities.

Baylor, the former NBA great who served as the Clippers' GM for 22 years, left the franchise with rancor and an unsuccessful lawsuit alleging race and age discrimination. Baylor claimed Sterling has a "plantation mentality" about the Clippers, envisioning a team of "poor black boys from the South playing for a white coach."

"When I heard that voice (on the TMZ recordings), there was a visceral reaction," said Douglas, who deposed Sterling during Baylor's lawsuit. "I recognized the venom in that voice."

But amid the national outrage over the Clippers owner's apparent comments last weekend, former NBA star Kevin Johnson asked the question that must be addressed by Commissioner Adam Silver and the owners who control the league.

"We wanted (Silver) to give us a full accounting of the prior accusations of racism made against Mr. Sterling and why those were never sanctioned by the NBA," said Johnson, who was asked by Clippers guard Chris Paul to speak for the players' union membership. "It's our responsibility to find out the history of Mr. Sterling, and why sanctions did not occur."

Anyone with even a passing knowledge of Sterling's history of discrimination charges and outlandish statements wasn't surprised by the latest revelations.

The son of a produce dealer, Sterling grew up in the Boyle Heights neighborhood of Los Angeles. Donny Tokowitz eventually changed his last name, earned a law degree and began practicing in divorce and personal injury in 1961. He spent his earnings methodically buying up real estate all across Los Angeles, becoming famous for almost never selling any property.

With encouragement from Lakers owner Jerry Buss, Sterling paid just over $12 million in 1981 for the beleaguered San Diego Clippers, who had moved out from Buffalo three years earlier.

Sterling was eccentric from the start, plastering his face on billboards and publicly hoping for a last-place finish so he could draft Ralph Sampson. During the 1980s, players claimed they would receive their paychecks on Fridays after the banks closed, likely to prevent them from bouncing.

Sterling abruptly moved his franchise to Los Angeles in 1984, receiving a $25 million fine from the NBA before countersuing and getting the penalty sharply reduced. He put the team in the decrepit Los Angeles Sports Arena and turned a tidy profit thanks to a sweetheart lease deal.

Despite their location in a glamorous major media market, the Clippers were a destination of last resort for most free agents and an unfortunate detour in their players' careers. When Ron Harper compared his time with the Clippers to a jail sentence in 1994, Sterling suspended him for a game without pay.

Along the way, Sterling and his insurance company paid $2.75 million to settle a federal housing discrimination lawsuit after court proceedings packed with scandalous testimony about Sterling's opinions of minority tenants in his properties. More salacious tales came out of Baylor's wrongful termination lawsuit, which was ultimately unsuccessful.

Sterling's alleged recorded comments included a personal attack on Magic Johnson, which came as a shock to the Dodgers owner and retired Lakers superstar.

"I had a friendship with him, so for him to then make these alleged comments about myself ... there's no place in our society for it," Johnson said of ABC's pregame show Sunday.

After three decades of nearly unrelenting misery and controversy, the strangest thing happened a few years ago: The Clippers got good.

Until now, most of the NBA's displeasure had been rooted in Sterling's performance as an owner, not any perceived racist beliefs or actions. When the Clippers became a contender - largely thanks to the acquisition of Paul in a trade overtly orchestrated by Stern - the league's concerns about Sterling's stewardship of the team started to subside.

A large segment of basketball-loving Los Angeles had always embraced the Clippers out of sheer contrarianism, not wanting to jump on the Lakers bandwagon. When the Clippers' fortunes changed, they became the fashionable favorite team for Hollywood's hipsters, transplants and basketball purists who wanted to be part of history on the ground floor - never mind the reputation of the owner.

And now that the Clippers are worth watching, Sterling might never be allowed to watch them from courtside again. Fan protests and boycotts are expected at Staples Center on Tuesday night when the Clippers resume their playoff series against the Golden State Warriors.

Douglas, who had Clippers season tickets for 10 years, has called for an extensive fan boycott. He hopes a public outcry will force the NBA's other 29 ownership groups to leverage Sterling out of the league.

"They have to be so embarrassed by the spectacle of his ownership that they band together and influence him into selling the team," Douglas said. "I am hopeful that some corporation will buy the team, probably at a premium, and once and for all rid Los Angeles of this man."