The Los Angeles Clippers hardly broke a sweat in cruising past free-falling Minnesota on Thursday, beating the Timberwolves 90-77 to move within half a game of the NBA lead. 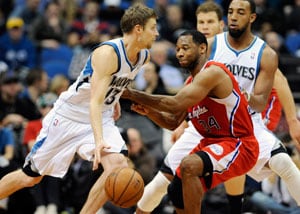 The Los Angeles Clippers hardly broke a sweat in cruising past free-falling Minnesota on Thursday, beating the Timberwolves 90-77 to move within half a game of the NBA lead.

Elsewhere, the Miami Heat repelled a late charge to hold off the Los Angeles Lakers, the New York Knicks beat the Detroit Pistons - in London - and the Milwaukee Bucks ended a lengthy run of outs in Phoenix by beating the Suns.

Jamal Crawford scored 22 points for the Clippers and Blake Griffin added 20 as the visitors shook off the continued absence of the injured Chris Paul and posted a comfortable win.

Luke Ridnour scored 21 points to lead the Timberwolves, who lost leading scorer and rebounder Nikola Pekovic to a bruised thigh in the third quarter, shot just 35.7 percent and lost their fifth straight.

Miami's stars shone in the win over the Lakers. LeBron James had 39 points and eight assists while Dwyane Wade added 27 points on his 31st birthday as the Heat won 99-90.

Kobe Bryant scored 13 of his 22 points in the fourth quarter for Los Angeles, which rallied for a brief lead midway through the final period before James and Allen - with seven points in the last five minutes - secured the win.

New York's Carmelo Anthony returned to the site of his Olympic triumph and scored 26 points to lead the Knicks over the Pistons 102-87.

Anthony scored 18 in the first half as the Knicks jumped out to a 16-2 lead before holding a double-digit lead for most of the game. He has 20 points in each of his past 25 games - the longest such streak of his career.

Amare Stoudemire added 17 points for the Knicks while Will Bynum's 22 points led the Pistons, who were the home team at the O2 Arena in London, the site of the Olympic gold-medal game during last year's London Games. It was the third regular-season NBA game played at the venue.

The Milwaukee Bucks ended a run of 24 consecutive defeats in Phoenix by beating the Suns 98-94.

Mike Dunleavy hit a 3-pointer with 57.4 seconds left to cap a 10-0 run as Milwaukee pulled away.

Monta Ellis scored 24 points for the Bucks, who had not won in the Valley since 1987 at the old Veterans Memorial Coliseum.

Shannon Brown scored 20 points off the bench for the Suns, who have lost four straight at home for the first time since 2004.

Comments
Topics mentioned in this article
NBA Minnesota Timberwolves Los Angeles Clippers
Get the latest Cricket news, check out the India cricket schedule, Cricket live score . Like us on Facebook or follow us on Twitter for more sports updates. You can also download the NDTV Cricket app for Android or iOS.