The Los Angeles Clippers routed Boston 106-77 on Thursday, becoming the first NBA team to win 15 consecutive games since the Celtics four years ago. 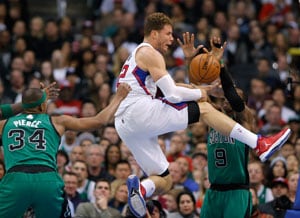 The Los Angeles Clippers routed Boston 106-77 on Thursday, becoming the first NBA team to win 15 consecutive games since the Celtics four years ago.

Also Thursday, the Oklahoma City Thunder won their 11th straight home game but needed overtime to do it, edging the Dallas Mavericks 111-105.

Los Angeles' Matt Barnes tied his season high with 21 points off the bench while Chris Paul had 11 assists to help the Clippers improve the NBA's best record to 23-6.

In Oklahoma City, Russell Westbrook dominated in overtime to steer the Thunder to a tight win.

Westbrook turned the game around with six straight points after the Mavericks had gone up 104-101 midway through overtime.

Westbrook had eight of his 16 points in overtime while Kevin Durant scored 40 points for the Thunder, who were down by 10 points with 7:17 of regulation to play.

Darren Collison scored a season-best 32 points for Dallas while Dirk Nowitzki scored nine points in his second game back after offseason knee surgery.