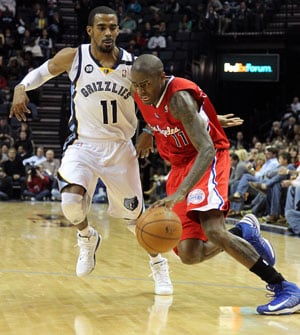 The matchup between two of the best teams in the West wasn't close much of the way. As the Clippers' Chris Paul watched from the sidelines after missing his first game this season because of a bruised right kneecap, the Grizzlies were without their leading scorer: Rudy Gay was excused for his grandmother's funeral in Baltimore.

Zach Randolph had 15 for Memphis.

Chicago's Carlos Boozer had 20 points and 13 rebounds and Luol Deng scored 18 points as the Chicago Bulls held Atlanta to a franchise-low 20 points in the first half of a 97-58 victory over the Hawks.

Reserve forward Mike Scott scored 10 points to lead Atlanta as none of the starters reached double figures. Josh Smith and Kyle Korver had nine points each.

Atlanta has lost five straight on the road and six of seven overall.

Emeka Okafor had 19 points and 11 rebounds to lead six players in double figures for Washington as the Wizards beat the Orlando Magic 120-91 for their third straight win.

The Wizards were just 4-28 before their streak, but beat Oklahoma City, Atlanta and now Orlando - all at home - to nearly double their wins total.

John Wall had 12 points and six assists in 20 minutes in his second game of the season after missing the Wizards' first 33 with a left knee injury.

At Boston, Rajon Rondo scored 17 points with 12 assists and 10 rebounds to lead the Celtics to a 100-89 victory over the Charlotte Bobcats.

It was Rondo's third triple-double of the season and the 26th of his career, including playoffs.

Darren Collison led six Dallas players in double figures with 23 points as the Mavericks matched their season high with a third straight win in a 113-98 victory against the Minnesota Timberwolves, while Kevin Durant scored 27 of his 41 points in the second half as Oklahoma City became the NBA's first 30-game winner of the season with a 102-90 win over the Phoenix Suns.

In other games, Al Jefferson scored 23 points and Gordon Hayward added 22 as the Utah Jazz beat the Miami Heat 104-97 and DeMarcus Cousins had 26 points, 14 rebounds and six assists as the Sacramento Kings downed the Cleveland Cavaliers 124-118.

Comments
Topics mentioned in this article
Matt Barnes Memphis Grizzlies Los Angeles Clippers NBA
Get the latest updates on ICC T20 Worldcup 2022 and CWG 2022 check out the Schedule, Live Score and Medals Tally. Like us on Facebook or follow us on Twitter for more sports updates. You can also download the NDTV Cricket app for Android or iOS.