The Clippers maintained NBA bragging rights in Los Angeles by beating their co-tenants, the Lakers, on Friday, surviving a last quarter comeback to win 107-102.

The Clippers maintained NBA bragging rights in Los Angeles by beating their co-tenants, the Lakers, on Friday, surviving a last quarter comeback to win 107-102.

Other teams to suffer disappointing home-court results were Miami, beaten by Chicago, and Memphis, which was defeated by Portland. The NBA-leading Oklahoma City Thunder kept on rolling though, downing Philadelphia. 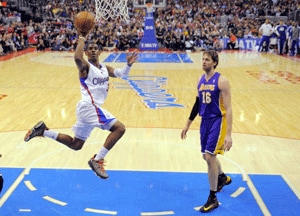 The Clippers led all the way against the Lakers, with Chris Paul having 30 points and 13 assists and Blake Griffin adding 24 points, but the Lakers stayed right in it.

Kobe Bryant scored 38 points and carried the Lakers in the fourth quarter when they closed to 99-97 with 1:29 left. But Paul scored the Clippers' final eight points to seal the victory and move a full 10 games above their more-famous city rivals.

The Chicago Bulls became only the third visiting team to win at Miami this season, dominating the boards and beating the Heat 96-89, with Carlos Boozer scoring 27 points.

Chicago outrebounded Miami 48-28. The Bulls had 19 offensive rebounds to four for the Heat.

Miami's LeBron James scored 30 points, extending his streaks of scoring at least 20 points to 31 consecutive games this season, and 52 games in a row overall when including last year's playoffs.

Oklahoma City beat the Philadelphia 76ers 109-85 to keep its nose ahead of the Clippers in percentage terms for overall top spot in the standings.

Russell Westbrook scored 27 points, Kevin Durant added 26 for the Thunder, which made eight of its first 10 3-point attempts in the second half to break open the game.

The Portland Trail Blazers edged the Memphis Grizzlies 86-84 in a contest that saw the scores tied nine times and 21 lead changes.

Wesley Matthews scored 21 points and J.J. Hickson added 19 points and 11 rebounds for Portland, which only hung on when Rudy Gay's jump shot from near the top of the key at the buzzer was off the mark.

Marreese Speights had a season-high 22 points and 13 rebounds for the Grizzlies in place of Zach Randolph, who missed the game with illness.

The Houston Rockets continued their run of recent good form, winning 115-101 at the Milwaukee Bucks.

James Harden scored 29 points, shooting 11 of 18 from the floor to go with seven assists and four steals.

The Rockets, who shot 54 percent from the field, also got 22 points from Carlos Delfino in his return to Milwaukee, where he played from 2009-12.

Milwaukee equaled a season worst by losing its third game in a row despite 16 points from Brandon Jennings.

The Boston Celtics ended a four-game skid by beating the Indiana Pacers 94-75, with Kevin Garnett scoring 18 points before he was ejected for a flagrant foul in the fourth quarter.

Rajon Rondo added 18 points, seven assists and five rebounds for Boston, which took control with a 17-3 run in the second quarter.

Tyler Hansbrough scored 19 points for the Central Division-leading Pacers, who had won six of seven.

The Detroit Pistons won their fourth on the trot, edging the Atlanta Hawks 85-84.

The Hawks, who trailed by as many as 19, had the ball in the final seconds, but Andre Drummond blocked Lou Williams' jumper at the buzzer to preserve Detroit's win.

Austin Daye had a season-best 20 points for the Pistons, who got 41 points from their bench.

Josh Smith had 20 points for Atlanta.

The Sacramento Kings won back-to-back road games with a 105-96 win at the Toronto Raptors, with DeMarcus Cousins scoring a season-high 31 points and matched his career high with 20 rebounds.

The Brooklyn Nets needed double overtime to defeat the Washington Wizards 115-113, securing the win when Joe Johnson sank a jump shot with only 0.7 seconds left.

The Cleveland Cavaliers also prevailed in a nail-biter, beating the Charlotte Bobcats 106-104. Kyrie Irving scored 33 points, including a jumper from the foul line with one second left.

Comments
Topics mentioned in this article
NBA Kobe Bryant Los Angeles Clippers Tiger Woods MS Dhoni Rafael Nadal
Get the latest updates on ICC T20 Worldcup 2022 and CWG 2022 check out the Schedule, Live Score and Medals Tally. Like us on Facebook or follow us on Twitter for more sports updates. You can also download the NDTV Cricket app for Android or iOS.