The Los Angeles Clippers held on to beat the Dallas Mavericks 99-93 on Wednesday and, extend their club-record home winning streak to 13 games. 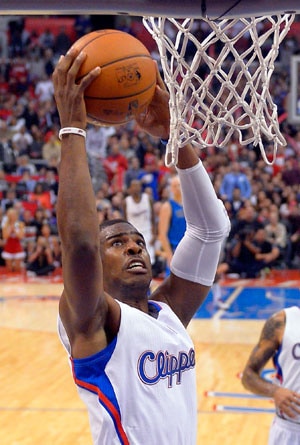 The Los Angeles Clippers held on to beat the Dallas Mavericks 99-93 on Wednesday and, extend their club-record home winning streak to 13 games.

Chris Paul had 19 points and 16 assists, Matt Barnes added 19 points off the bench, and Blake Griffin had 15 points and 13 rebounds for the Clippers (29-8), who took sole possession of the NBA's best record from Oklahoma City with their third straight win overall.

After losing its last game on a buzzer-beater against a last-place Washington team saddled by injuries to its three top players, Oklahoma City left nothing to chance with the Timberwolves missing All-Star forward Kevin Love and four others.

Alexey Shved scored 18 points for Minnesota, which announced earlier in the day that Love would miss eight to 10 weeks after breaking his right hand for the second time.

Tony Parker scored 24 points, while Manu Ginobili added 19 points and Tiago Splitter and Stephen Jackson had 14 each for San Antonio, which has won 11 straight at home.

Boston recovered from a dreadful third quarter as Jeff Green scored 14 points and rookie Jared Sullinger added 12 points and 16 rebounds in the Celtics' 87-79 win over the Phoenix Suns.

Brandon Jennings scored 20 of his 35 points in the third quarter for Milwaukee as the Bucks beat the Chicago Bulls 104-96 for their second consecutive victory under interim coach Jim Boylan.

Carlos Boozer had 22 points and 11 rebounds for the Bulls, who have dropped their last two games against Milwaukee at the United Center.

New Orleans' Roger Mason scored 15 of his 17 points in the fourth quarter to rally the Hornets to an 88-79 victory over the Houston Rockets, while the Memphis Grizzlies completed a 3-0 road trip with a 94-87 win over the Golden State Warriors.

In other games, the Denver Nuggets rallied for a 108-105 win over the Orlando Magic, the Utah Jazz claimed their fourth win in five games with a 112-102 defeat of the Charlotte Bobcats, the Toronto Raptors handed the Philadelphia 76ers their fifth straight loss 90-72, and the Cleveland Cavaliers downed the Atlanta Hawks 99-83.

Comments
Topics mentioned in this article
NBA Los Angeles Clippers
Get the latest updates on ICC T20 Worldcup 2022 and CWG 2022 check out the Schedule, Live Score and Medals Tally. Like us on Facebook or follow us on Twitter for more sports updates. You can also download the NDTV Cricket app for Android or iOS.