Jeremy Lin put together another signature performance at Madison Square Garden as the Houston Rockets defeated his former team, the Knicks, 109-96 in his first game back in New York. 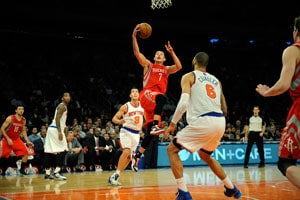 Jeremy Lin put together another signature performance at Madison Square Garden as the Houston Rockets defeated his former team, the Knicks, 109-96 in his first game back in New York.

Lin, who took the basketball world by storm during last season's "Linsanity," scored 22 points and had eight assists on Monday night as Houston handed the Knicks their first loss of the season at home.

The sellout crowd at the Garden gave Lin a loud ovation during the pre-game introductions.

"It was a lot of fun playing out there," said Lin, who heard some boos once the game started. "I think our team took a step in the right direction. For me, it was great to be back and it was a lot of fun to play on that court again."

James Harden scored a team-high 28 points and grabbed 10 boards for the Rockets, who snapped a seven-game road losing streak.

It was the second time this year the Rockets beat the Knicks, who were unable to keep pace on Monday. The Rockets outscored the Knicks 54-29 over the second and third quarters.

Chris Copeland notched a career-best 29 points for the Knicks, who had a 12-game unbeaten streak at home dating back to last season.

Copeland, who was starting in place of injured Carmelo Anthony, scored all of his points in the second half.

"It's one bright spot," said Copeland. "But we lost and we have to go back to the drawing board and figure out exactly what we didn't do right."

Lin is one of the few Asian Americans in NBA history, and the first American of Taiwanese descent to play in the league.

The talented point guard and Harvard University graduate parleyed his success last season with the Knicks into a generous free agent contract with Houston.

"It was fine," Lin said of the reaction from the Knicks fans' Monday. "I had fun. A lot of people showed up and supported me and wore my old jersey. It was a lot better than I thought."

He became the toast of the basketball world, appearing on the cover of "Sports Illustrated" in consecutive weeks. The only other NBA players to do that are Dirk Nowitzki and Michael Jordan.

Lin was named in Time magazine's 2012 list of the "Top 100 Most Influential People in the World."

He was also the second-most Googled person of 2012, behind Whitney Houston, and his jersey was the second-highest selling in the NBA.

The Knicks failed to match Lin's contract offer from the Rockets for about $25 million over three years.

"It's not up to me," Anthony told Newsday. "It's up to the organization to say that they want to match that ridiculous contract."

New York could have matched the offer for Lin, but the team had other plans.

They boasted an impressive 18-5 record heading into Monday's game, but that didn't intimidate Lin, who apparently wanted to show management and Anthony that they had made a mistake by letting him go.

The Rockets headed into Madison Square Garden with a respectable record of 11-12 but they have had a trying year.

They had to deal with the death of head coach Kevin McHale's 23-year-old daughter Sasha, and first-round pick Royce White is being treated for an anxiety disorder.

It hasn't been an easy year for Lin either. He excelled under former Knicks coach Mike D'Antoni, who used an up-tempo, point guard-based system. Under McHale, Lin's numbers are down.

Heading into Monday's game, Lin was averaging just 10.8 points and 6.0 assists this season.

Until Monday night, Lin's best performance was against the San Antonio Spurs last Monday, when he scored 38 points and had seven assists in a losing cause.

Despite the slow start, Lin is third in Western Conference guard All-Star voting behind Kobe Bryant and Chris Paul. The game is in Houston this year.