Jeremy Lin was among Houston's top scorers as the Rockets beat the Los Angeles Clippers 98-81 on Saturday to firm their grip on seventh place in the NBA Western Conference playoff race. 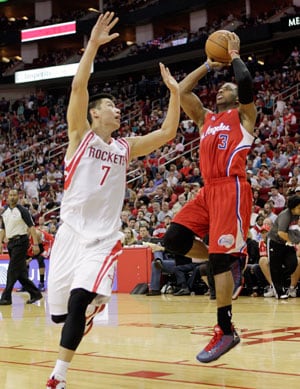 Jeremy Lin was among Houston's top scorers as the Rockets beat the Los Angeles Clippers 98-81 on Saturday to firm their grip on seventh place in the NBA Western Conference playoff race.

After losing two games in the absence of injured top scorer James Harden, the Rockets managed to win without their shooting guard, with Lin, Chandler Parsons and Francisco Garcia scoring 15 points apiece.

Elsewhere, Oklahoma City moved with two games of San Antonio for the West lead by beating Milwaukee, Utah and the Los Angeles Lakers both won to stay locked together in the fight for the last West playoff spot, Dirk Nowitzki hit a last-gasp 3-pointer to lift Dallas over Chicago, Memphis downed Minnesota to overtake the Clippers, and Golden State closed in on a playoff berth by beating Portland.

Oklahoma City's Kevin Durant scored 30 points and Russell Westbrook had a triple-double in the Thunder's 109-99 win over the Milwaukee Bucks.

Ersan Ilyasova had 29 points and 14 rebounds for Milwaukee.

The victory was the fourth straight for Utah, which holds the tiebreaker over the Lakers if the two teams remain on identical win-loss records.

Brook Lopez led Brooklyn with 27 points, while former Utah player Deron Williams had 21 on 6-of-14 shooting, with 11 assists.

The Lakers kept pace with a 103-98 victory over the Sacramento Kings.

Dwight Howard added 24 points and 15 rebounds for Los Angeles, which hosts 10th-place Dallas in a critical match on Tuesday.

Tyreke Evans had 21 points and nine rebounds for Sacramento.

The Mavericks stayed 1-1/2 games behind Utah and the Lakers thanks to Nowitzki's 3 with only 2.9 seconds on the clock, giving Dallas a 100-98 win over the Chicago Bulls.

The Mavericks trailed by 12 in the fourth quarter, but Nowitzki scored Dallas' last eight points in a closing 15-1 run over the final 31/2 minutes of the game. He finished with a season-high 35 points.

Chicago's Nate Robinson missed a jump shot at the buzzer that would have tied it. He scored 14 of his 25 points in the fourth quarter.

Memphis' Marc Gasol scored 21 points as the Grizzlies beat the Minnesota Timberwolves 99-86, pulling away in the final quarter.

Mike Conley scored 19 for the Grizzlies, who ended a five-game road losing streak with their 11th straight victory over Minnesota.

Golden State moved a step closer to ending a five-year playoff absence, staying 1-1/2 games clear in sixth in the West after a 125-98 win over the Portland Trail Blazers.

Stephen Curry scored 39 points and Carl Landry had a season-high 25 points and 10 rebounds coming off the bench for the Warriors.

Meyers Leonard led the Trail Blazers with 22 points and 10 rebounds.

Indiana's Paul George scored 25 points to lead all five Indiana starters in double figures as the Pacers won their fourth straight with a 112-104 victory at the Phoenix Suns.

Atlanta's Ivan Johnson scored a season-high 21 points off the bench as the Hawks pulled away to beat the Orlando Magic 97-88.

Philadelphia's Jrue Holiday scored 10 straight points late to guide the 76ers to a 100-92 win over the Charlotte Bobcats.

Comments
Topics mentioned in this article
David Beckham Los Angeles Clippers Jeremy Lin Dynamo Kiev NBA
Get the latest updates on IND vs NZ 2021, check out the Schedule and Live Score . Like us on Facebook or follow us on Twitter for more sports updates. You can also download the NDTV Cricket app for Android or iOS.