LeBron James spent two days trying to figure out the right words. An assistant jotted some ideas on notecards, which were ignored. So when the moment came to deliver his MVP acceptance speech, James spoke emotionally about family, charity, history and what the Miami Heat organization means to him. 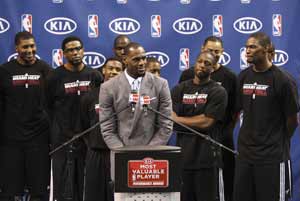 LeBron James spent two days trying to figure out the right words. An assistant jotted some ideas on notecards, which were ignored. So when the moment came to deliver his MVP acceptance speech, James spoke emotionally about family, charity, history and what the Miami Heat organization means to him.

And he finished with a flourish.

"Heat nation, we have a bigger goal," James said. "This is very overwhelming to me as an individual award. But this is not the award I want, ultimately. I want that championship. That's all that matters to me."

James accepted his third NBA MVP award on Saturday, making him the eighth player in league history to win that many. The others, Kareem Abdul-Jabbar, Michael Jordan, Bill Russell, Wilt Chamberlain, Larry Bird, Magic Johnson and Moses Malone, all have won NBA titles.

On Sunday, James resumes that quest.

"He's going to get his," Heat President Pat Riley said. "He will get his championship. And there might be a lot more there, too."

James lauded the other top candidates for the MVP, and lauded his teammates and those around him even more.

When the results were released, Durant offered congratulations.

"LeBron, that's like unheard of for a guy to get three out of four MVPs," Durant said. "A good friend of mine. I'm happy for him and of course I would love to have the MVP but at the same time, I've just got to keep improving, keep getting better and hopefully I'll have one soon."

The way some around the Heat see it, Saturday could have been a fourth straight MVP for James.

His numbers this season, 27.1 points, 7.9 rebounds and 6.2 assists and 1.9 steals per game on 53 percent shooting - are extremely comparable to last season, when he finished a distant third in the MVP race behind Derrick Rose and Dwight Howard.

Similar numbers. Much better result. And James understands why.

A year ago, following all the fallout that accompanied his decision to leave Cleveland and sign with Miami, James realized there was no way he was going to have voters back him for a third straight season. Long before the results were in, James knew the 2011 MVP wasn't going to be his.

"I just felt like there was nothing good that was going to come out as far as the individual accolades," James said. "I wanted to be an MVP for this team, but it didn't matter to me what the outside world was saying. It didn't matter what the voters were saying last year. It was just about this team."

"I'm not saying that's changed," he added, "but I think time heals all."

Heat assistant coach Bob McAdoo won the MVP while playing for the Buffalo Braves in 1975. McAdoo said James had to deal with "absolute hate" last year after his move to Miami, and some believe the repercussions kept him from getting as many MVP votes as he may have deserved a year ago.

That's no longer a problem.

Abdul-Jabbar was 26 when his third MVP season, out of a record six, ended. James is 27. Riley, the former Los Angeles Lakers coach during the Showtime era, has an affinity for both.

And he thinks he can see a parallel as well.

"He's got 10 more years at least ahead of him at a very high level," Riley said. "You just know his competitive nature and how he prepares himself and how he plays. That could be out there for him."

James got the word about this MVP award on Thursday. Longtime friend and close associate Randy Mims delivered the message because James couldn't be reached when the call came. Of all the messages Mims has given James over the years, this one was unforgettable, he said.

"It was kind of an honor, honestly," Mims said. "A huge honor. His response, it was like a breath of fresh air, like, 'Wow, I did?' I know what was put into this year, being part of it. I know what we went through last year and trying to just rebuild him, his game, some of the things he wanted to get back to doing as a person."

James was out shopping on Friday when word began to spread that he won. Even though James already had spent a day processing the news, he said it was moving to hear others react.

"This is crazy," James said.

James posed with the trophy on Saturday and will get to show it off to Heat fans Sunday afternoon when presented with the prize again by Commissioner David Stern before Miami faces Indiana in Game 1 of an Eastern Conference semifinal series.

James' voice broke a couple of times as he spoke Saturday, highly uncharacteristic for him - and he confessed he was more nervous than he expected.

"I see my two sons, I do what I do and I try to perform at the highest level every night, and a big part of the reason is those guys. I don't want to let them down," James said, pausing for a brief moment as he looked at fiancee Savannah Brinson and his sons. "Secondly, my teammates, like I said. The reason I'm up here today is because of those guys. If those guys don't sacrifice what they sacrifice every single night ... I wouldn't be up here."

Moments later, he asked the entire Heat roster to join him on the stage, and the players huddled behind him.

Said Heat coach Erik Spoelstra: "We do not take LeBron James for granted, not here in this organization."

Heat guard Dwyane Wade grabbed the trophy before the ceremony started, a playful jab and nothing else. When he was having an MVP-caliber season but finished third in 2009, Wade said James would be a candidate for the award for years to come.

He didn't mind then, and minds even less now that they're teammates.

"It's amazing to think about it in that sense, three in four years," Wade said. "And there could have been one last year. It just shows how great of a talent, how great of a player that he is. Obviously, as an organization, we're excited, especially coming off of last season and everything that happened and was said."

James came into this season with a new mindset, a happier one, one that meant he wasn't going to play this season the way he did last year when he was consumed by trying to silence critics. The critics, he knows now, won't be going away.

Well, maybe unless he wins that title. MVP awards are nice, but James knows they simply don't compare.

"I'd give all three of them back for an NBA championship," James said. "It's all I care about. It's all I know."