LeBron James scored 32 points after shooting 10 for 14 from the field, and the Heat rode the strength of what became a 32-2 run to easily beat the Knicks 100-67 on Saturday, striking first in the series between clubs that waged classic annual battles from 1997 through 2000 and are meeting for the first time since. 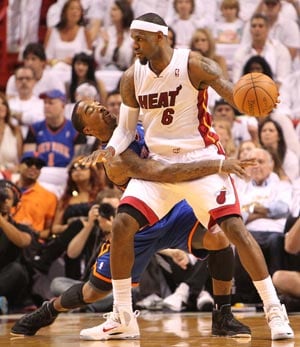 LeBron James scored 32 points after shooting 10 for 14 from the field, and the Heat rode the strength of what became a 32-2 run to easily beat the Knicks 100-67 on Saturday, striking first in the series between clubs that waged classic annual battles from 1997 through 2000 and are meeting for the first time since.

Dwyane Wade added 19 points in his first game back after dislocating his left index finger.

"Our guys had a noticeable look in their eyes the last 24 hours," Heat coach Erik Spoelstra said. "We wanted to get back to the basics and play to our identity. For the most part, we were able to do that by being aggressive."

No, this wasn't redemption for falling short in last season's finals.

But for James and the Heat, it sure was a fine start.

It was physical, it was heated - and it was one-sided. New York's 67 points matched a franchise playoff low.

Mario Chalmers finished with 11 points and nine assists for Miami, which turned 27 New York turnovers into a franchise playoff-record 38 points. The Knicks were called for 21 fouls in the first half, Miami enjoying a 28-5 advantage in free throws attempted in the first 24 minutes alone, and center Tyson Chandler sent James flying with what was called a flagrant foul as the Heat were blowing the game open.

J.R. Smith scored 17 for the Knicks, who lost Iman Shumpert to a torn knee ligament and have dropped 11 straight playoff games dating back to 2001. Carmelo Anthony missed 12 of 15 shots and finished with 11 points and 10 rebounds, and Baron Davis added 10 points for New York.

"This series is not over," Knicks forward Amare Stoudemire said. "We've got to learn from our mistakes today and get ready for Monday."

The series isn't, but Shumpert's is. The Knicks said the rookie guard also tore a lateral meniscus and would miss approximately six to eight months. Even before an MRI at a hospital, Anthony said what was obvious to anyone who saw Shumpert take a non-contact tumble in the third quarter.

"We know Shump is not going to be with us," Anthony said.

Maybe it was ironic that this game took a turn when someone who helped doom Miami in last season's finals sent the two-time MVP flying.

Chandler - who helped Dallas win the 2011 title over Miami,Â  set a back pick near midcourt with 1:34 left in the half, and James never saw it coming. The original call was a flagrant-2 against Chandler, which would have meant an automatic ejection. After review, it was downgraded to a flagrant-1, so Chandler could stick around for the rest of the debacle.

Given that he spent Friday and Saturday fighting the flu, Chandler would have probably rather left anyway.

An awful 9 minutes for the Knicks decided this one.

After all, this is a Heat-Knicks playoff series. It's almost required to have emotions boil over.

With Jeff Van Gundy and Alonzo Mourning in the building, remember, the former Knicks coach once tugged on the Heat center's leg during one memorable Miami-New York playoff dustup - along with Knicks assistant general manager Allan Houston, he of the game-winner to eliminate the Heat from the last playoffs following a lockout-shortened season of 1999, things got heated once again.

There were early hints that tensions were high, like Stoudemire and Udonis Haslem getting double-technicals after jawing back and forth with 4:10 left in the opening quarter. A few minutes later, after Shane Battier committed a hard foul on Anthony, who missed his first seven shots - Davis ran about 50 feet to give Battier a light shove.

That was all little stuff, compared to what was coming. Said Woodson: "All hell broke loose."

Mike Miller's 3-pointer with 2:22 left in the half capped a run of 13 straight points by the Heat, and they were just getting started.

After making both free throws awarded for the Chandler foul, James banked in a 20-footer from the left wing while getting hit by Smith 10 seconds later for what became a five-point possession for Miami.

"I thought it was a legal pick, honestly," Chandler said.

And James still wasn't done, first hitting a fadeaway with 48 seconds left, then a layup while getting hit by Jared Jeffries with 3 seconds left in the half.

"Spectacular," Spoelstra said of James' flurry. "His play spoke for itself. It seemed on both ends of the court he had his hands on every single play, in some form or another."

A bad day got even worse for the Knicks midway through the third.

Shumpert,Â  who started the final 17 games of the regular season after Jeremy Lin had knee surgery - was carried off the court by teammates after going down in almost the exact spot as where the Chandler-James collision took place.

Shumpert was bringing the ball up the right sideline and tried to dribble behind his back when he pulled up and immediately grabbed at his left knee. He was brought into the Knicks' locker room for evaluation, and as he was lifted from the floor Anthony looked at the scoreboard, shaking his head in disbelief.

Absolutely everything was going Miami's way.

"We're just trying to play our game," Wade said, "trying to come out and take care of business."

James provided the exclamation point with 1.4 seconds left in the third quarter.

He made a 3-pointer over Anthony, and then got the fourth quarter off. Through three quarters, the entire Knicks roster had only outscored James by 15, and Miami took an 81-47 lead into the final 12 minutes.

"I think the Miami Heat right now are feeling great about their performance," Stoudemire said. "Which they should."