LeBron James contributed 29 points and 14 rebounds as the Heat took a 2-1 series lead with a 91-85 victory over the Oklahoma City Thunder on Sunday. 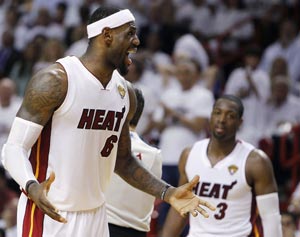 LeBron James contributed 29 points and 14 rebounds as the Heat took a 2-1 series lead with a 91-85 victory over the Oklahoma City Thunder on Sunday.

Miami also won Game 3 of the finals last year, but that was its last victory as the Dallas Mavericks stormed to the title. It was a painful failure for James, who seems determined to prevent a similar collapse.

Wade had 25 points, seven rebounds and seven assists for the Heat, who "carry that pain with us" from last year, according to forward Chris Bosh.

"We think about it every day and that really helps us to succeed in this series," Bosh said.

James' poor performance was part of the problem then, but he seems on top of his game this time. His 3-pointer sent the Heat to the fourth quarter with the lead, and he scored five straight Miami points when the Heat were building just enough cushion to hold off another late flurry by the Thunder.

Game 4 is on Tuesday.

Kevin Durant had 25 points for the Thunder, but picked up his fourth foul in the third quarter and had to go to the bench when they seemed to have control of the game.

"It was frustrating," Durant said. "Of course we had a good lead and they came back and made some shots. We fouled shooters on the 3-point line twice. It's a tough break for us, man. You know, I hate sitting on the bench, especially with fouls."

The Heat survived their own fourth-quarter sloppiness - nine turnovers - by getting enough big plays from their Big Three.

James scored 30 and 32 points in the first two games, his two best finals performances. He fell just shy of another 30-point effort but reached 20 points for the 20th time this postseason, two shy of Wade's franchise record set in 2006.

Gone is the player who seemed so tentative down the stretch last year in his second finals failure. He's constantly on the attack now, all while defending Durant in key situations.

"He was great. He's been great for us all playoffs," Heat forward Udonis Haslem said. "I don't know if he looks up at the clock or score sheet, but he knows when we need him to make big plays and come through for us, and he comes through."

Bosh had 10 points and 11 rebounds for the Heat, who can win a second title by winning the next two games at home. That's what they did in 2006, one of just two home teams to sweep the middle three games in the 2-3-2 format.

They seemed out of it when Oklahoma City opened a 10-point lead midway through the third. But Durant had picked up his fourth foul with 5:41 left on Wade's baseline drive, though there appeared to be little or no contact. Thunder coach Scott Brooks decided to sit Russell Westbrook with him, and the Heat charged into the lead by the end of the period.

The Thunder grabbed their last lead at 77-76 on James Harden's basket with 7:32 left. James answered with two free throws about 20 seconds later, and the teams would trade turnovers and stops over the next couple of tense minutes.

Wade then converted a three-point play, and another minute went by before James powered to the basket, Durant trying to get in position to draw a charge but watching helplessly as he picked up his fifth foul. James made the free throw for an 84-77 advantage with 3:47 to play.

After another basket by James, the Thunder had one last burst - haven't they always in this series? - ripping off six straight points to get within one before Bosh made a pair of free throws with 1:19 to play. Durant missed badly on a wild shot attempt, and the Thunder missed another chance when Westbrook was off from behind the arc. James hit a free throw for a four-point lead with 16 seconds to go and Wade added two to close it out.

"Last year I don't know if we was experienced enough as a unit to deal with what came at us," Wade said. "I just feel like we understand the situations more and we can deal with it better."

The Thunder were just 4 of 18 on 3-pointers and hit only 15 of 24 free throws, unusually awful numbers for one of the league's best offensive teams. Harden, the Sixth Man of the Year, shot 2 of 10 for his nine points. Westbrook finished with 19 points.

James and Wade had some dazzling drives in the second and Shane Battier got free for a pair of 3-pointers in the final 2 minutes, but the Thunder stayed with them the entire way, briefly holding a three-point lead. Westbrook's 3-pointer with 2.3 seconds left cut Miami's lead to 47-46.

Oklahoma City started to take control with a 14-2 run early in the third. Durant had the first four points, and Westbrook fooled the Heat with a fake behind the back pass before sneaking in for a layup. Then Durant leaped over James for a follow dunk before nailing a jumper for a 60-51 lead with 6:55 left in the period.

But it was barely a minute later when he drew his fourth foul. The Thunder pushed the lead to 10 on Derek Fisher's four-point play, but the Heat got right back in it when Battier and then Jones made all six free throws after being fouled behind the arc.

Brooks also pulled Westbrook with 5 minutes left and left him out the remainder of the period, leaving the Thunder without their two best players as they tried to hang onto the lead.

The Heat scored the final seven of the period, Wade making a turnaround jumper and two free throws before setting up James for a 3-pointer that made it 69-67 headed to the final quarter.