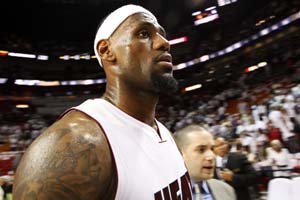 The Heat will meet Indiana in the East semifinals starting on Sunday in Miami.

Carmelo Anthony scored 35 points for the Knicks, including a jumper at the end of the third quarter that pulled New York within 81-67.

Stoudemire fouled out with 4:48 left, and the Knicks cut the lead to 11 points four times in a 2-minute span. Miami answered every time, the last of those a 3-pointer by Shane Battier with 54 seconds left.

The last time New York advanced in the postseason came at Miami's expense in the East semifinals in 2000.