Ty Lawson scored 25 points and the Denver Nuggets raced to an early 24-point lead on their way to a 99-84 victory over the Los Angeles Lakers on Friday night in Game 3 of their first-round series. 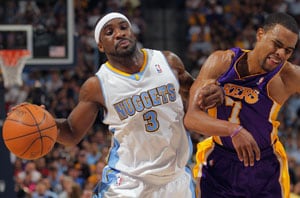 Ty Lawson scored 25 points and the Denver Nuggets raced to an early 24-point lead on their way to a 99-84 victory over the Los Angeles Lakers on Friday night in Game 3 of their first-round series.

JaVale McGee had 16 points and 15 rebounds for the Nuggets, who will try to even the best-of-seven series at two games each on Sunday night at the Pepsi Center.

Playing with an energy and enthusiasm that had been missing in the playoffs, the Nuggets grabbed a 55-39 halftime lead by stifling Andrew Bynum down low and forcing Kobe Bryant to work harder for his baskets.

Although both Bynum and Bryant got it going after halftime and the Lakers cut their deficit to four points in the third quarter, the hole was too big to climb out of.

Bynum's putback with 1:18 left in the third quarter not only pulled the Lakers to 68-64 but his inadvertent elbow on the play broke Al Harrington's nose. He didn't return, but the Nuggets went on a 12-5 run to regain their composure and control of the game.

Bryant finished with 22 points on 7-of-23 shooting after scoring 31 and 38 points in L.A.'s two wins at the Staples Center, and Bynum had 18 points and 12 rebounds.

Kenneth Faried had a double-double for Denver, scoring 12 points and pulling down 15 rebounds as the Nuggets outrebounded the Lakers 55-44. Denver's bench outscored the Lakers' reserves 39-9.

The Lakers never trailed in their two wins in Los Angeles, but once Danilo Gallinari's reverse layup with 8:07 left in first quarter gave Denver its first lead of the series, the Nuggets looked unstoppable.

"It's been tiring always having to come from a hole and having to dig out of a hole, and the energy of the game becomes fatiguing mentally," Nuggets coach George Karl said before tipoff.

Finally, it was the Lakers doing the chasing.

The Nuggets used a 28-2 run spanning the first and second quarters to take a stunning 38-14 lead.

Lawson scored 13 of the Nuggets' points as they scored 20 of the final 22 points of the first quarter, then teamed with Corey Brewer and Harrington on a trio of 3-pointers to stretch Denver's lead to 41-17.

The Lakers, however, replied with a 14-2 run. Los Angeles cut the deficit to single digits in the third quarter.

Comments
Topics mentioned in this article
NBA Ty Lawson MS Dhoni Kobe Bryant Rafael Nadal Tiger Woods
Get the latest updates on India vs Australia Series, check out the India vs Australia Schedule for 2020-21 and Ind vs Aus live score . Like us on Facebook or follow us on Twitter for more sports updates. You can also download the NDTV Cricket app for Android or iOS.