Gasol must still be cleared to return by doctors, and he admitted that the head injury was difficult to deal with. 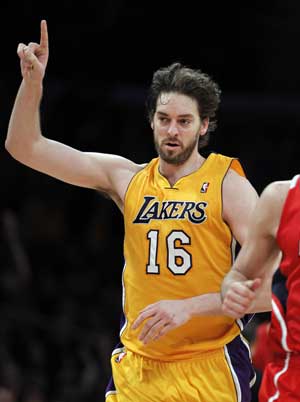 Lakers forward Pau Gasol, sidelined for five games because of a concussion, hopes to return to action on Thursday when Los Angeles host reigning NBA champions the Miami Heat.

"I feel better -- a lot better, actually," Spain's Gasol said after training on Wednesday. "I feel 100 percent now. Got a good workout in today and everything felt good. Tomorrow will be a go."

Gasol must still be cleared to return by doctors, and he admitted that the head injury was difficult to deal with.

"The struggling of getting up every day and not getting better, constant headaches, being bothered by light or noise and not knowing what the next day will be like or not knowing when you'll be healthy," he said of the difficulties posed by the injury.

"You do a little research about concussions and it's an unfortunate hit, but those can happen any day or any game. If you get concussed the second time, it's a lot more dangerous."

Gasol's injury was yet another blow for a Lakers team that has floundered this season.

Thursday's match-up against Miami was once billed as a possible NBA finals preview, but the Lakers go into the contest languishing in 11th place in the Western Conference and well behind in the race for one of eight playoff spots.

After a six-game losing streak -- their worst in six years -- the Lakers have put together two straight victories. Having center Dwight Howard back from a shoulder injury helped their cause.

In wins over Cleveland and Milwaukee, Howard averaged 26.5 points and 15 rebounds.

Comments
Topics mentioned in this article
NBA
Get the latest updates on ICC T20 Worldcup 2022 and CWG 2022 check out the Schedule, Live Score and Medals Tally. Like us on Facebook or follow us on Twitter for more sports updates. You can also download the NDTV Cricket app for Android or iOS.