Metta World Peace was subdued and contrite in the Los Angeles Lakers' locker room, apologizing to Oklahoma City's James Harden for throwing the elbow that sent them both to the locker room in the second quarter. 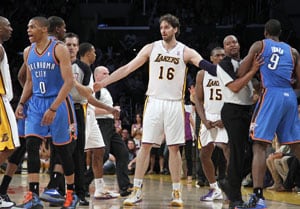 Metta World Peace was subdued and contrite in the Los Angeles Lakers' locker room, apologizing to Oklahoma City's James Harden for throwing the elbow that sent them both to the locker room in the second quarter.

They both missed a beauty of a game that could echo into the postseason for two division leaders.

Kobe Bryant scored six of his 26 points in the second overtime alongside an unorthodox Lakers lineup, and Los Angeles rallied from an 18-point deficit in the second half for a 114-106 victory over the Thunder on Sunday.

Pau Gasol had 20 points, 14 rebounds and nine assists for the Lakers, who made an impressive comeback in their regular-season home finale against off-target Thunder stars Kevin Durant and Russell Westbrook, who combined to miss 42 of their 56 shots. Los Angeles' rally stunned Thunder and set an early tone for their possible second-round playoff matchup.

"It's not so much that we beat Oklahoma, but how we did it," said Bryant, who shook off his own woeful shooting game with two key 3-pointers late in regulation. "In the playoffs, particularly if you don't have home-court advantage, you're going to have games like this. We have to have the poise and the confidence to just keep chipping away."

Yet everything after halftime was coloured by the drama and violence that occurred 1:37 before the break.

World Peace had just dunked over Durant and Serge Ibaka on a fast break and was headed back upcourt when he ran into Harden. While pounding his chest with his right arm, World Peace raised his left elbow over Harden's shoulder and cleanly hit Harden in the back of the skull.

Harden dropped to the court and stayed down for about a minute before heading to the locker room. Ibaka and other Thunder players challenged World Peace, but were kept apart, and World Peace was ejected after officials reviewed the tape.

"I got real emotional and excited, and it was unfortunate that James had to get hit with the unintentional elbow," said World Peace, who had scored 12 points and played solid defense on Durant. "I hope he's OK. Oklahoma, they're playing for a championship this year. I apologize to the Thunder and James Harden. It was just unfortunate."

The Thunder didn't immediately announce whether Harden, who scored 14 points, had a concussion. Bryant and other Lakers acknowledged World Peace is likely to face a multigame suspension with just one game left in their regular season.

"I'm just happy my teammate is all right," said Durant, who scored 35 points on 11-for-34 shooting. "It was a bad play. Hopefully Ron didn't do it intentionally or have any malicious intentions on that. We've got to move past that."

Ibaka had 18 points and 14 rebounds for the Thunder, who led by 11 points with 4 minutes left in regulation. Westbrook had 14 points on 3-for-22 shooting and 10 assists as Oklahoma City fell 1 1/2 games behind San Antonio atop the Western Conference with just its third loss in nine games.

Despite the loss, Durant finally passed Bryant in the race for both superstars' third NBA scoring title. Durant, the two-time defending scoring champion, is averaging 27.906 points with two to play, while Bryant - the NBA's top scorer for nearly the entire regular season - slipped back into second at 27.862 points per game with just one game left.

The Lakers rallied with seldom-used Devin Ebanks and Jordan Hill alongside Bryant, Gasol and backup point guard Steve Blake, who hit three key 3-pointers. Ebanks had eight points and two key defensive plays in the final minute, while Hill had 14 points and a career high-tying 15 rebounds.

"Being down double digits against a very good team, we could have folded easily," Lakers coach Mike Brown said. "This might have been our best team win of the year."

Bryant struggled through the first three quarters of his first home game since April 6 before coming alive down the stretch during Los Angeles' rally. Bryant then hit the tiebreaking fall-away jumper with 52 seconds left in the second overtime, followed by two free throws as the Lakers hung on.

Even with Harden unavailable to provide his usual offensive boost, the Thunder could only blame themselves for a 4-for-19 fourth quarter with four turnovers, followed by a 5-for-17 effort in the two overtime periods.

"I believe in Kevin, I believe in Russell, I believe in what our guys do," Thunder coach Scott Brooks said. "Some nights they're not going to fall for you, but if the execution is good and the shots are good, you have to live with the results."

World Peace was making major contributions to the Lakers on both ends of the court before his ejection for yet another unpredictable outburst in the erstwhile Ron Artest's long history of misbehaviour.

World Peace, who changed his name last year, has been mostly well-behaved during his three seasons with the Lakers, even winning an award as the NBA's citizen of the year for his extensive charity work around mental-health issues. Yet he'll always be most famous for his 86-game suspension for participating in the brawl in the Palace of Auburn Hills stands while playing for Indiana in November 2004.

The Lakers pulled within one point on World Peace's dunk, but fell apart after the ejection, managing just 14 points in the next 14 minutes.

Comments
Topics mentioned in this article NBA MS Dhoni Kobe Bryant Rafael Nadal Tiger Woods
Get the latest Indian Premier League 2020 news, check out the IPL 2020 schedule, Cricket live score . Like us on Facebook or follow us on Twitter for more IPL 2020 updates. You can also download the NDTV Cricket app for Android or iOS.
Related Articles