Basketball star Kobe Bryant's wife, who stood by her husband when he was charged with sexual assault in 2003, filed for divorce on Friday from the Los Angeles Lakers star, citing irreconcilable differences after a decade of marriage. 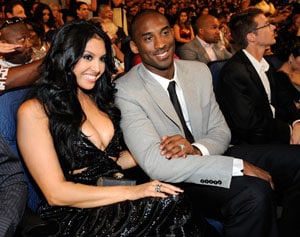 Basketball star Kobe Bryant's wife, who stood by her husband when he was charged with sexual assault in 2003, filed for divorce on Friday from the Los Angeles Lakers star, citing irreconcilable differences after a decade of marriage.

Vanessa Bryant signed the papers on Dec. 1. Kobe Bryant signed his response on Dec. 7 and it was filed Friday, according to the documents.

"The Bryants have resolved all issues incident to their divorce privately with the assistance of counsel and a judgment dissolving their marital status will be entered in 2012," according to a statement from a representative for the couple.

The Bryants "ask that in the interest of our young children and in light of the upcoming holiday season the public respect our privacy during this difficult time," according to the statement.

Bryant met his future wife in 1999 on a music video shoot when Vanessa Laine was 18 years old. Six months later, she and the then-21-year-old Bryant became engaged. They married on April 18, 2001.

The Bryants have been through trying times together.

Vanessa Bryant appeared at a news conference with her husband when he was charged with sexually assaulting a 19-year-old woman who worked at the exclusive Lodge & Spa at Cordillera near Vail, Colorado, in 2003. She held his hand and stroked it tenderly as the NBA star admitted he was guilty of adultery - but nothing else. Earlier she had issued her own statement to the media, vowing to stand by her husband.

"I know that my husband has made a mistake - the mistake of adultery," she said in the statement at the time. "He and I will have to deal with that within our marriage, and we will do so. He is not a criminal."

A year later, prosecutors dropped the criminal charge against Kobe Bryant because the woman did not want to go ahead with a trial.

Last year, Kobe and Vanessa Bryant settled litigation with a former maid who accused the NBA star's wife of harassment. The Bryants countersued Maria Jimenez for violating a confidentiality agreement by talking to reporters about the family.

Comments
Topics mentioned in this article
MS Dhoni Kobe Bryant Rafael Nadal Tiger Woods NBA
Get the latest updates on ICC Women's Cricket World Cup 2022 and IPL 2022, check out the Schedule , Live Score and IPL Points Table. Like us on Facebook or follow us on Twitter for more sports updates. You can also download the NDTV Cricket app for Android or iOS.