Andrew Bynum had 23 points and 16 rebounds, Gasol made back-to-back 3-pointers in overtime, and the Lakers won their fourth straight game without the NBA's leading scorer, 112-108 over the Dallas Mavericks on Sunday. 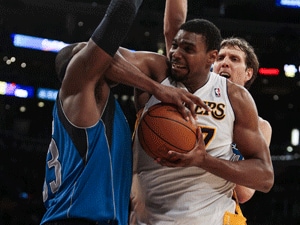 Andrew Bynum had 23 points and 16 rebounds, Gasol made back-to-back 3-pointers in overtime, and the Lakers won their fourth straight game without the NBA's leading scorer, 112-108 over the Dallas Mavericks on Sunday.

Ramon Sessions scored 22 points, and Gasol had 20 points and 10 rebounds as Los Angeles rallied from a fourth-quarter deficit before finishing off a four-game season sweep of the defending champion Mavericks, who swept the two-time champion Lakers out of last season's playoffs.

"This team eliminated us last year, and they're the champs right now," said Gasol, who buried his sixth and seventh 3-pointers of the season in OT. "If we face them again, I don't know if this 4-0 in the regular season will be worth a whole lot. We'll have to start over and make sure we play as hard as we've been playing lately."

Coach Mike Brown thought the Lakers put together a remarkable team effort in Bryant's absence, with everybody on the floor in overtime contributing a key play. Matt Barnes' cagey defense capped the OT effort against Jason Terry, who missed what should have been an easy tying layup with 5 seconds left.

With the Lakers holding the No. 3 spot in the West playoff picture and the Mavs at No. 6, both teams realize they could meet again in two weeks. The Lakers boosted their lead over the Clippers atop the Pacific Division to 11/2 games with six to play. The Lakers also have the tiebreaker edge on their next-door rivals.

"We're excited about the playoffs, but we're still going to have that bitter taste in our mouths until then," Barnes said.

Barnes had 11 points, 11 rebounds, eight assists and Los Angeles' key defensive play, and Metta World Peace scored 18 points for the Lakers, who are 4-1 while Bryant rests his bruised shin. Bryant is still contributing to the Lakers by shouting out instruction and encouragement from the bench, but his teammates are figuring out how to win when they can't count on Kobe to take the big shot.

"Metta, Andrew, myself, we all feel we have to step up in Kobe's absence," Gasol said. "A different guy can do it every game."

Dirk Nowitzki had 24 points on 9-of-28 shooting and 14 rebounds for the Mavericks, whose three-game winning streak ended. Delonte West scored 20 points, and Terry had 21 before overthinking his drive and jamming a layup into the underside of the rim while trying to avoid Barnes' defense.

"I solely take the blame for it," Terry said. "I command and ask for the ball in that situation, and to not be able to deliver for the team is an utter disappointment. ... Give (Barnes) credit, it was a savvy defensive play, but if I do it again, I know what kind of play I'm going to make."

Both teams had chances to win near the regulation buzzer, but Sessions missed an awkward shot with 1.5 seconds to play, and Nowitzki clanged a 3-point attempt off the back rim.

While the Mavericks claimed Barnes goaltended one of the Lakers' overtime baskets, they also blamed themselves for a middling effort.

"I just have to make some shots," said Nowitzki, an unimpressive 36 for 95 over his last five games. "I was more of a volume shooter, and that's not the way I want to play. I want to be an efficient scorer. I've got some work to do."

Gasol gave the lead back to the Lakers on consecutive corner 3's, with Nowitzki's third 3-pointer sandwiched between them. World Peace put the Lakers up 110-106 with a fadeaway jumper with 1:04 to play.

Bynum has been fighting a respiratory infection, but coach Mike Brown described him as "an absolute beast" against Dallas. After a slow start in the first half, Bynum returned to the dominant form he showed while getting 30 rebounds and scoring 30 points in consecutive games, a feat last accomplished by Moses Malone in 1982.

During a midgame interview with ABC, Bryant said his shin feels much better, and he intends to return to the Lakers well before the playoffs. Bryant is walking without discomfort, but the 28.1-points-per-game All-Star hasn't played since April 6.

Bryant has missed just 100 games in his 16-season NBA career,