At Los Angeles, Dwight Howard had 31 points and 16 rebounds, and Kobe Bryant also scored 31 points as the Lakers beat the Milwaukee Bucks 104-88 for their second straight win after a six-game skid. 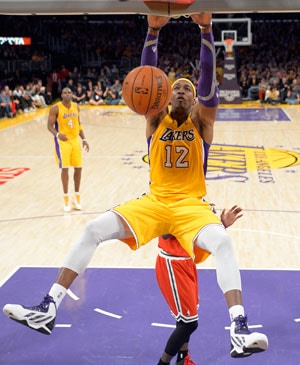 The Los Angeles Clippers won again in the absence of the injured Chris Paul on Tuesday as Jamal Crawford scored a season-high 30 points, including 12 straight to start the fourth quarter, in a 117-109 victory over the struggling Houston Rockets.

Los Angeles used a big third quarter to take the lead, and Crawford extended the advantage to 20 by outscoring Houston 12-7 in the opening minutes of the fourth quarter.

James Harden had 23 points for the Rockets, whose four-game losing streak is a season worst.

Denver's Wilson Chandler hit a tiebreaking 3-pointer with 14.9 seconds remaining in overtime as the Nuggets beat the Portland Trail Blazers 115-111 in overtime for its season-best sixth consecutive victory.

Danilo Gallinari had 25 points, including a key 3-pointer in the extra period. Ty Lawson added 24 points and 12 assists for the Nuggets.

At Los Angeles, Dwight Howard had 31 points and 16 rebounds, and Kobe Bryant also scored 31 points as the Lakers beat the Milwaukee Bucks 104-88 for their second straight win after a six-game skid.

Metta World Peace added 12 points as the Lakers prepared for Thursday's visit from the NBA champion Miami Heat with an impressive effort against the Bucks, who lost for the second time in five games under interim coach Jim Boylan.

Indiana handed Charlotte its 13th straight home loss as Roy Hibbert had 18 points and seven rebounds in the Pacers' 103-76 win over the Bobcats, while the Brooklyn Nets beat the Toronto Raptors 113-106 to extend their season-high winning streak to seven games.

Comments
Topics mentioned in this article
NBA Tiger Woods Kobe Bryant MS Dhoni Rafael Nadal
Get the latest Cricket news, check out the India cricket schedule, Cricket live score . Like us on Facebook or follow us on Twitter for more sports updates. You can also download the NDTV Cricket app for Android or iOS.