Kobe Bryant's management and Virtus Bologna have released a joint statement saying they are working "very intensely" to bring the Los Angeles Lakers star to Italy during the NBA lockout. 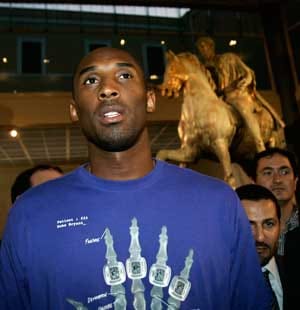 Kobe Bryant's management and Virtus Bologna have released a joint statement saying they are working "very intensely" to bring the Los Angeles Lakers star to Italy during the NBA lockout.

Bologna president Claudio Sabatini told The Associated Press on Friday that he had reached a tentative deal with Bryant's agent Rob Pelinka for a 10-game contract worth more than $3 million.

"Virtus Pallacanestro Bologna and the management of Mr. Bryant are working very intensely to try and create this important deal," Monday's statement said. "Reaching such a complex deal requires both sides' maximum attention for every little detail."

"Everyone wants a positive outcome to the deal, the goal of which is Kobe Bryant's presence in Italy, economic interests for the 17 clubs in Serie A and more attention for all of Italian basketball."

However, the deal hinges on other clubs altering their schedules to ensure Bologna have five home games during Bryant's 10-game contract. Bologna also want their opening five away games played in Italy's biggest arenas, and wants to avoid an early-season bye.

Smaller clubs Cremona and Varese have been reluctant to alter their schedules, although the Italian league said on Saturday it was intervening to help arrange an agreement.

"I hope that very shortly we'll have a deal," Sabatini said on Monday, according to the ANSA news agency. "I want to thank Kobe, who demonstrated again overnight that he wants to return to Italy."

The Italian league has still not released its full schedule, with Venezia recently added as a 17th team.

Bryant lived in Italy between ages 6 and 13 while his father played in the country. He still speaks fluent Italian and has said it would be a "dream" to play in the country.

Bologna would need to have the deal signed by the end of this week to register Bryant before its opening game against Roma on Sunday.

In New York on Saturday, NBA owners and players failed to reach a new labor deal after about seven hours of talks focused mostly on the league's salary cap structure.

The sides were meeting again on Monday, though time is getting short to save the scheduled start of the regular season on November 1.

Comments
Topics mentioned in this article
NBA MS Dhoni Kobe Bryant Rafael Nadal Tiger Woods Bologna
Get the latest updates on ICC Women's Cricket World Cup 2022 and IPL 2022, check out the Schedule , Live Score and IPL Points Table. Like us on Facebook or follow us on Twitter for more sports updates. You can also download the NDTV Cricket app for Android or iOS.