Kobe Bryant scored 22 points, Andrew Bynum added 19 and the Los Angeles Lakers' stars got plenty of help from their supporting cast in a 92-88 win over the Denver Nuggets on Sunday for a 3-1 lead in their first-round playoff series. 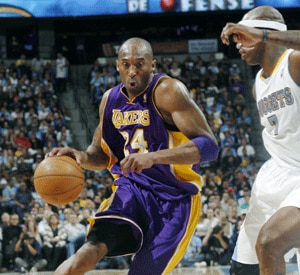 Kobe Bryant scored 22 points, Andrew Bynum added 19 and the Los Angeles Lakers' stars got plenty of help from their supporting cast in a 92-88 win over the Denver Nuggets on Sunday for a 3-1 lead in their first-round playoff series.

The Lakers can wrap it up on Tuesday when the series shifts back to Staples Center for Game 5.

Reserve Jordan Hill was big for L.A., posting a double-double with 12 points and 11 rebounds, and Steve Blake scored 10 points, including a key 3-pointer in the final minute as the Lakers overcame a six-point halftime hole and a 71-70 deficit heading into the fourth quarter.

"This was fun," Blake said. "It doesn't get any better than this. Playoff basketball, this is what it's all about."

Ramon Sessions scored 12 points and also had a big 3 in the final minute for L.A.

With the game tied at 86, Danilo Gallinari was covering Bryant when a hard screen from Pau Gasol sent him to the floor grabbing his face. Bryant worked the ball to Sessions, whose 3-pointer from just in front of the Nuggets bench put the Lakers ahead 89-86 with 48 seconds remaining.

Andre Miller was whistled for basket interference at the other end, and Blake sank a 3-pointer from the left corner with 18.9 seconds left for a six-point cushion, L.A.'s biggest of the night.

Gallinari led the Nuggets with 20 points, and Miller had 15.

After torching the Lakers for 50 points combined in the previous two games, Ty Lawson was held to 11 points and Nuggets big men Kenneth Faried and JaVale McGee weren't nearly as effective on offense or disruptive defensively as they were in Game 2, when they combined for 28 points and 30 rebounds.

Together, they had 14 points and 11 boards on Sunday.

Coming off a 7-for-23 shooting performance in Game 3, Bryant got off to another shaky start, missing his first three shots, losing the handle on a breakaway and allowing Lawson to swipe the ball away another time, resulting in a shot clock violation.

He briefly found his stroke with seven straight points but finished the first half 5 for 13 for 12 points, leaving him with a .333 shooting clip in the first six quarters at the Pepsi Center on the heels of his 15-for-29 performance in Game 2.

Bynum, who blamed his scoreless first half 48 hours earlier on failing to properly prepare in the pregame, was much more active early on, scoring 11 in the first half, which ended with the Lakers trailing 51-45.

The game was briefly delayed with 1:10 left in the first half when a female fan started walking across the court while the Nuggets were setting up a play.

The woman walked several steps onto the court as Lawson brought the ball past halfcourt. Officials blew the whistle to stop the play and the woman was escorted away by security.

Al Harrington scored nine points in his return to the Nuggets' lineup. He started out with a clear face mask protecting his nose that was broken Friday night by an inadvertent elbow from Bynum, but he ditched the mask in a matter of minutes.

Nuggets coach George Karl said earlier on Sunday he was counting on a big game from Big Al, who is also playing with a torn meniscus in his right knee.

"I'm hoping the karma of basketball rewards a guy who probably shouldn't be playing," Karl said. "He's going to fight through a lot of problems and a lot of pain and his experience and his toughness is something that we need on the court."

Harrington missed his first six shots but then sank four straight, including a 3-pointer that put the Nuggets ahead 76-75 early in the fourth quarter.

Comments
Topics mentioned in this article
NBA Andrew Bynum MS Dhoni Kobe Bryant Rafael Nadal Tiger Woods
Get the latest updates on ICC Women's Cricket World Cup 2022 and IPL 2022, check out the Schedule , Live Score and IPL Points Table. Like us on Facebook or follow us on Twitter for more sports updates. You can also download the NDTV Cricket app for Android or iOS.