Jeremy Lin checked back in, triggering the wave of cheers that accompany his every move at Madison Square Garden. 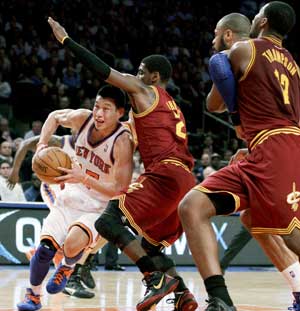 Jeremy Lin checked back in, triggering the wave of cheers that accompany his every move at Madison Square Garden.

This time, they were for the guys leaving the game.

Lin had 19 points and 13 assists and Carmelo Anthony scored 22, but the New York Knicks turned around this one with their reserves to beat the Cleveland Cavaliers 120-103 on Wednesday.

"I think our second unit did an awesome job," Lin said. "I think we've been talking a lot about our depth and tonight we definitely got to see the depth, and so that's going to be a strength of ours and we need to continue to use that."

The Knicks didn't lead until Novak made consecutive 3-pointers to put them up 75-74 with 2:52 left in the third quarter, then dominated the fourth quarter to send the Cavs to their third straight loss. Their bench produced 50 points, outscoring the starters 38-33 in the final 24 minutes.

"We hope that's the normal-case scenario, if that's possible," coach Mike D'Antoni said. "And to be honest, the last couple of days in practice, that group has just kicked our first group's butt every day, so it wasn't different. They've been playing that way."

Antawn Jamison had 23 points and 10 rebounds for the Cavaliers, beaten at home by Boston on Tuesday, giving them losses on consecutive nights to two of the teams within reach for a playoff spot.

The interesting point guard matchup between the No. 1 pick and the guy who wasn't picked was about even. Irving seems headed toward the Rookie of the Year award and has led the Cavaliers into playoff contention, but he and most of the rest of the NBA have been obscured by the player he said has "been on ESPN every single day."

Irving seemed to have little interest in discussing Linsanity. He said he didn't really speak to Lin when they both played in the Rising Stars Challenge on Friday at the All-Star game and repeated the same basic answer when twice asked about his counterpart, saying Lin was a great story, great point guard, and was leading the Knicks to wins.

With the recent additions of Baron Davis and JR Smith, and the return of rookies Iman Shumpert and Josh Harrellson from injuries, the Knicks believe their depth has become a strength. And it was the reserves who broke open the game to start the fourth quarter.

The Knicks began the period with a 19-6 burst, turning a two-point lead into a 101-86 advantage as the starters watched. Novak made two 3-pointers, Davis made a layup and hooked up with Smith on a gorgeous alley-oop. Jared Jeffries had a bucket and Shumpert capped it with a layup with 5:50 remaining before the first team finally got to play again.

"I think in the first half we came out kind of flat," Novak said. "In the second half, we all went out and warmed up and we knew we had to get it going, and we knew if defensively we got it going our offense would happen, and that's what happened."

Amare Stoudemire and Tyson Chandler came back with 5:23 left, and Lin and Anthony returned 21 seconds later for Davis and Smith. The reserves got loud ovations as they departed, and Novak was even treated to a "We want Novak! We want Novak!" chant with about 3 minutes left.

Chandler had 13 points and 15 rebounds.

Cleveland appeared on its way to joining Toronto, Charlotte, Phoenix, Milwaukee, New Orleans and New Jersey as sub.-500 teams who have won at Madison Square Garden. The Knicks missed eight of their first nine shots as Cleveland raced to a 7-1 lead. Jamison's 3-pointer with 6.5 seconds left made it 31-24 after one quarter.

Daniel Gibson hit three straight 3-pointers midway through the second to push the lead to 16, and it peaked at 17 later in the period before the Cavs settled for a 61-49 advantage at halftime.

Lin bounced back from his 1-for-11 performance in a 102-88 loss at Miami in the last game before the break, going 6 of 12 with only one turnover. Irving, playing in front of family and friends from nearby New Jersey, shot 8 of 18.

Comments
Topics mentioned in this article Steve Novak NBA
Get the latest Indian Premier League 2020 news, check out the IPL 2020 schedule, Cricket live score . Like us on Facebook or follow us on Twitter for more IPL 2020 updates. You can also download the NDTV Cricket app for Android or iOS.
Related Articles

Virat Kohli Put His Body Through "One Hell Of A Lot": Ravi Shastri
Advertisement