Kevin Garnett scored 29 points, his most in the regular, or postseason this year, and added 11 rebounds to help Boston maintain home-court advantage in the best-of-seven, second-round series. Game 2 is on Monday in Boston before the series shifts to Philadelphia for Games 3 and 4. 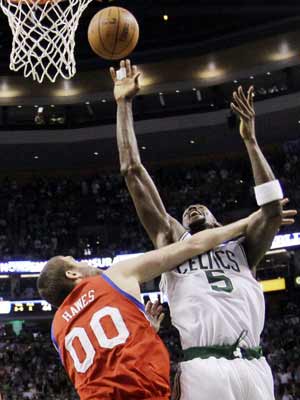 Kevin Garnett scored 29 points, his most in the regular, or postseason this year, and added 11 rebounds to help Boston maintain home-court advantage in the best-of-seven, second-round series. Game 2 is on Monday in Boston before the series shifts to Philadelphia for Games 3 and 4.

"If you've watched us all season, we're not going to drop our heads," Collins said. "We live to come back and fight just as hard in Game 2, at least as long as I'm the coach."

Andre Iguodala scored 19 points and Evan Turner had 16 with 10 rebounds for Philadelphia, which advanced to the second round for the first time since 2003 by beating East No. 1 seed Chicago. But Turner couldn't catch Rondo in the final seconds when Philadelphia had a foul to give.

"Rondo just leaps out. That's the last thing on your mind: him going into our side of the court," Iguodala said. "You could have a turnover down there. It's a gamble, but it's a good play. ... We could have done a better job scoping it out."

After Spencer Hawes' basket from the right baseline put the Sixers up 84-83, Rondo drove to the basket and, with his path blocked, turned and handed the ball to Garnett. He banked one in and drew the foul to give Boston a two-point lead, then added another jumper.

After misses by Turner and Lou Williams, Paul Pierce hit a fall-away jumper with 78 seconds left to make it a six-point lead - the Celtics' biggest of the night.

Boston still led by five when Jrue Holiday made a jumper, then Rondo fouled him with 3.4 seconds left and he made both foul shots. Boston inbounded the ball from between the benches, and Rondo sprinted back into the backcourt and outran Turner to the wrong basket as the time expired.

Pierce, who had a sprained MCL in his left knee, scored 14 points on 3-for-11 shooting. Rondo was only 6 for 15 from the floor, but he was 3 for 6 in the fourth quarter, adding five rebounds and four assists.

Hawes scored 13 of his 15 points in the second half.

Both teams advanced by winning their first-round series in six games: Boston beat Atlanta, and Philadelphia eliminated the Bulls to become the fifth No. 8 seed to eliminate a No. 1. They got only one day off before beginning the second round in Boston, where the Celtics earned their only victory against the Sixers this year.

The Sixers scored the first seven points of the game and led by 10 at the end of the first quarter, when Boston shot 30 percent. It was 45-32 when Boston scored 10 of the last 12 points in the half, with Rondo picking up four assists and a steal in the final 3 minutes before the break.

A little more than two minutes into the third, Avery Bradley outraced Rondo to a long rebound and took it in, splitting defenders Iguodala and Holiday for the reverse layup that made it 48-47 - Boston's first lead of the game. Philadelphia quickly retook the lead and extended it to eight points.

Comments
Topics mentioned in this article
NBA Andre Iguodala Detroit Pistons Rajon Rondo Philadelphia 76ers Kevin Garnett
Get the latest updates on Olympics 2020, Olympics 2020 Medal Tally, Live Cricket Score . Like us on Facebook or follow us on Twitter for more sports updates. You can also download the NDTV Cricket app for Android or iOS.