Kevin Durant scored 32 points, reserve Daequan Cook had all 19 of his points in the fourth quarter and the Oklahoma City Thunder beat the Sacramento Kings 118-110 on Tuesday to win their first game since top bench player James Harden took an elbow to the head. 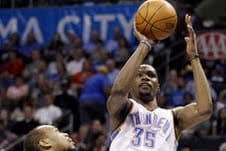 Kevin Durant scored 32 points, reserve Daequan Cook had all 19 of his points in the fourth quarter and the Oklahoma City Thunder beat the Sacramento Kings 118-110 on Tuesday to win their first game since top bench player James Harden took an elbow to the head.

Durant extended his lead in a tight NBA scoring race with the Los Angeles Lakers' Kobe Bryant despite sitting out the entire fourth quarter in a close game. Durant is averaging 27.97 points per game to Bryant's 27.86 with each having one game left.

Cook filled Harden's void, scoring Oklahoma City's first 14 points of the final period to put the Thunder ahead for the first time since the first quarter.

DeMarcus Cousins, who was allowed to play only after his 13th technical foul was rescinded earlier in the day, led Sacramento with 32 points.

With the Thunder locked into the No. 2 seed in the Western Conference playoffs, coach Scott Brooks held his starters out in the fourth quarter even though it was a four-point game after three.

Cook wiped away that deficit immediately with a jumper and a 3-pointer, and ably filled Harden's usual role as the big scorer off the bench. Harden averages 16.8 points, best among NBA reserves.

Harden suffered a concussion Sunday when he was elbowed in the back of the head by the Lakers' Metta World Peace, formerly Ron Artest, and didn't pass league-mandated tests that would have allowed him to return and play. The team has him listed as day-to-day and it's unknown if he'll be ready in time for the start of the playoffs this weekend.

The Kings were without leading scorer Marcus Thornton for the third straight game with a left quad contusion, and reserve Terrence Williams was out sick.

Travis Outlaw moved into the starting lineup and scored a season-high 20 points - only his fourth game in double figures this season. Jason Thompson scored 22, Tyreke Evans had 18 and Isaiah Thomas 11 as all five Sacramento starters hit double figures.

It still wasn't enough down the stretch.

Royal Ivey put Oklahoma City ahead to stay with a long jumper from the left side with 3 minutes left, and Cook's 3-pointer in transition extended the lead to 114-107 with 44.9 seconds left. Cole Aldrich hit all four of his free throws to close it out.

Sacramento made 18 of its 22 shots (82 percent) in the first quarter to get out to a 40-35 lead after Isaiah Thomas' buzzer-beating 3-pointer. It was the most points allowed by Oklahoma City in any quarter this season.

The Kings followed that by scoring 10 of the first 12 points in the second quarter to build a 50-37 lead following Jason Thompson's three-point play, and Sacramento hit the half-century mark less than 15 minutes into the game.

Cousins hit a hook shot and a two-handed slam to get the Kings going again after Oklahoma City had closed to 59-57 at halftime, sparking a 10-0 run that pushed the lead back out to 13.

Oklahoma City then scored the next nine points to close the gap to 77-73 after Durant's 3-pointer.

Comments
Topics mentioned in this article
NBA Kevin Durant Sacramento Kings
Get the latest updates on India vs Australia Series, check out the India vs Australia Schedule for 2020-21 and Ind vs Aus live score . Like us on Facebook or follow us on Twitter for more sports updates. You can also download the NDTV Cricket app for Android or iOS.