Kevin Durant scored 17 of his 36 points in another nightmarish final period for James and his team, leading a Thunder storm that overwhelmed the Heat and gave Oklahoma City a 105-94 victory over Miami in Game 1 on Tuesday. 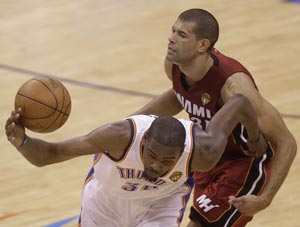 Kevin Durant scored 17 of his 36 points in another nightmarish final period for James and his team, leading a Thunder storm that overwhelmed the Heat and gave Oklahoma City a 105-94 victory over Miami in Game 1 on Tuesday.

"That's what they do, they keep on coming," Heat coach Erik Spoelstra said. "They're relentless."

Teaming with Russell Westbrook to outscore the Heat in the second half by themselves, Durant struck first in his head-to-head matchup with James, who had seven points in the final quarter and was helpless to stop the league's three-time scoring champion.

"Well, those guys, they came out on fire. They were passing the ball well, knocking down shots. We just wanted to continue to keep playing," Durant said. "It's a long game, and every time our coach was just saying play harder, play harder, and that's what we did."

Westbrook turned around a poor shooting start to finish with 27 points, 11 assists and eight rebounds for the Thunder, keying a strong finish to the third period that gave the Thunder the lead for good.

Durant took over from there.

Scoring in nearly every way possible, Durant finished 12 of 20 from the field and added eight rebounds. He and Westbrook outscored the Heat 41-40 over the final two periods, showing that maybe this time it will be offense that wins championships.

James finished with 30 points, his most in any of his 11 finals games, but had only one basket over the first 8:15 of the fourth, when the Thunder seized control of a game they trailed for all but the final few seconds of the first three quarters.

James averaged just three points in the fourth quarters of the Heat's six-game loss to Dallas last year, taking almost all the heat for Miami's finals failure. He was good in this one, Durant was just better.

"They didn't make many mistakes in the fourth quarter," James said.

And when fans chanted "MVP! MVP!" late in the game, they weren't talking about James, the guy who won the regular-season award.

They meant Durant, who is in a race with James for his first ring, and maybe the title of best player in the game.

Dwyane Wade had 19 points but shot just 7 of 19 for the Heat, while Shane Battier provided some rare offense by scoring 17 points, his high this postseason.

Turning to a small lineup late in the third quarter, the Thunder improved to 9-0 at home in the postseason. Defensive ace Thabo Sefolosha helped defend James during the Thunder's comeback, relieving Durant of the burden so he could focus on his scoring.

And right now, nobody does it better.

Spoelstra said his team, pushed to seven games against Boston in a grueling conference finals the Heat finally won Saturday, preferred this quick turnaround. But perhaps they ran out of gas against the young Thunder, whose core players are all 23 and younger and look as if they could keep playing all night.

"Honestly, I think we just came out with a lot more intensity on the defensive end. Made them feel us a little bit," Westbrook said of the second half, when the Thunder outscored the Heat 58-40.

James and Wade both were bent over, hands on knees, during one stoppage with about 7 minutes remaining. Durant kept pouring it on, racing down the court to throw down a fast-break dunk and later adding a 3-pointer that pushed it to 87-81 with 6 1-2 minutes remaining.

The Heat got within four points, but Durant hit two quick baskets and Westbrook added another for a 10-point lead with 3:35 to go.

"They just made more plays than us," Wade said. "They got a couple offensive rebounds that kind of hurt us. Got a couple of open shots and from that point we were kind of playing from behind."

It's been a rapid rise toward the top for the Thunder, who started 3-29 in 2008-09, their first season here after moving from Seattle. Fans were clearly embracing the finals' arrival in Oklahoma City, where cars, buildings and even fans' hair seemed to be painted some form of orange or blue.

Fans standing until the Thunder's first basket didn't have to wait long, Durant knocking down a baseline jumper 70 seconds in. He made his first three shots, including two 3-pointers, but his teammates missed their first six attempts in falling into an early hole.

Durant made sure they were fine at the end.

Both superstars tried to downplay their individual matchup, Durant insisting it was about the team and James adamant that he didn't care about the best player in the game argument.

It was James' supporting cast that stepped up bigger to start, the Heat hitting five of their six 3-point attempts in jumping to a 29-22 lead after one quarter. Spoelstra kept Chris Bosh as a reserve, the role he has played since returning from a nine-game absence with a strained lower abdominal muscle. Smart decision, as Battier hit his first three 3-point attempts in the opening minutes to spark Miami's strong start.

Durant took only one shot in the second quarter, and it wasn't until 9 minutes had passed. By then, the Heat had built a lead as large as 13 points, keeping it in or near double digits most of the period before the Thunder sliced it to 54-47 at halftime.

Seemingly every fan was wearing the blue shirts hung on their chairs before the game - an exception being rapper Lil Wayne, who caused a stir during the Western Conference finals when he posted on Twitter that the Thunder wouldn't let him into their arena, with the team saying simply that he needed to buy tickets if he wanted to come. He did, he and his guest both wearing black.

The sea of blue around the court looked like the scene last year in Dallas, where James struggled so badly when it mattered most. He said he let his team down, vowing he would have no regrets about his performance this time around.

Unfortunately, the result was all too familiar to the Heat.

James quickly answered after Oklahoma City tied the game for the first time at 60-all midway through the third, banking in a shot and powering in for a layup and a quick four-point lead. The Heat pushed the lead back to five but the Thunder kept coming, finally pulling ahead for the first time when Westbrook darted into the lane and was fouled while scoring with 16.4 seconds remaining, the free throw making it 74-73.

Baskets by Durant and Sefolosha to open the fourth pushed it to a five-point lead, and the Heat never recovered.