Kentucky owns the Bluegrass State. Now it can concentrate on the rest of the country. 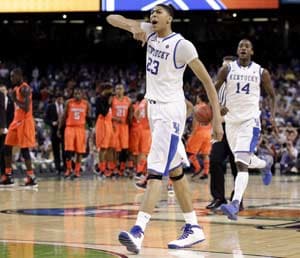 Kentucky owns the Bluegrass State. Now it can concentrate on the rest of the country.

Anthony Davis and top-seeded Kentucky will play for the national title Monday night after finally putting away pesky Louisville 69-61 in the Final Four on Saturday night.

It will be Kentucky's first appearance in the title game since winning a seventh NCAA crown back in 1998 and gives coach John Calipari another shot at the title that has eluded him. The Wildcats (37-2) will face the winner of Kansas-Ohio State.

As the final seconds ticked down, Davis pointed to the court and screamed twice "This is my stage!"

With Davis, everybody's player of the year, leading a star-studded roster, Kentucky was the top seed in the tournament and the heavy favorite to cut down the nets when the whole tournament was done. And Calipari wouldn't let his young players consider anything else, saying repeatedly this was "just another game."

But playing in-state rival Louisville (30-10) is never just that, and the Cardinals made Kentucky work deep into the second half to grind this victory out.

Louisville outrebounded Kentucky 40-33, including a whopping 19-6 advantage on the offensive glass - the sole reason the Cardinals were able to make a game of this.

"I just said John, 'I'll be pulling for you, bring the trophy back home to Kentucky,'" Louisville coach Rick Pitino said. "Sometimes there's a lot of talk about these guys fighting, dialysis, there's also really a lot of people that get along. ... For those that have brains, they root for each other.

"We like their basketball team; we hope they bring it home for the state."

Bigger, bulkier and with the 19-year-old freshman Davis having a wider wingspan than some small airplanes, the Wildcats looked like playground bullies as they pushed Louisville around on their way to a 13-point lead early in the second half. But the Cardinals know a thing about rallies after coming from 11 points down to beat Florida in last weekend's West Regional final, and they sure made Kentucky sweat.

After Siva made a pair of free throws, Terrence Jones scored on a jumper and Darius Miller drilled a 3 - only Kentucky's second of the game - to give the Wildcats control for good.

"I'm proud of this team. They're coming together," Calipari said. "They've taken on shots and runs like Louisville did today, and they've held their own, so I'm proud of them."

Just to make sure Louisville didn't get any wild notions about another late comeback, Kidd-Gilchrist threw down a monstrous dunk with 1:05 to play that had Kentucky fans on their feet and assistant coaches from Kansas and Ohio State scrambling to try and find a way to stop this juggernaut.

Kentucky shot a dazzling 57 percent - yes, that's right - with Davis leading the way. He missed just one of his eight shots and finished with 18 points and 14 rebounds. Miller added 13 points, and Doron Lamb had 10. Kidd-Gilchrist had nine, all in the second half.

"We're one game closer to our dream and our goals," Davis said.

Siva led the Cardinals with 11 points, and Gorgui Dieng had 12 rebounds.

The Kentucky-Louisville rivalry caused tempers to flare even in December when, in the grand scheme of things, games really don't mean much. Heck, it took government intervention just to get the two schools to play on a regular basis back in the 1980s.

With the NCAA title game on the line, the latest skirmish in basketball's version of the civil war so divided the small hoop-crazed state that senior citizens actually came to fisticuffs and made for must-see TV. The game was such a big deal that No. 1 Kentucky fan Ashley Judd wasn't even the biggest celeb in the house, with Jay-Z taking a prime seat behind the Kentucky bench.

"It's our fans; our fans are great to us," Davis said. "Our fans travel a long way. We want to go out here and give them a show and give them what they want, which is a national championship."

Bragging rights in the state is sure a nice way to start.

Kentucky is 19-11 since the teams resumed playing in 1983-84, with the Wildcats winning four straight, including a 69-62 victory at Rupp Arena on Dec. 31 - almost the exact score as Saturday night's win.

"They made runs, and we made our runs. That's what coach always says," Jones said. "We never get rattled."

The Wildcats know they're talented - there are three, maybe as many as five NBA lottery picks on the Kentucky roster - but they play without ego or cockiness, choosing instead to let their superior play overwhelm their opponents.

That was certainly the case with Louisville.

The Cardinals had skidded into the Big East tournament with four losses in their last six games, including back-to-back defeats to end the regular season. Pitino told his players they could either go home after the first week of the tournament or they could do something special, their choice.

The Cardinals chose the latter, ripping off four wins in four days to win the Big East tournament and ousting No. 1 seed Michigan State in the West Regional semifinals. Then came that comeback against rough-and-tumble Florida.

Those games hardened the Cardinals, and they promised they weren't simply happy to reach the Final Four. But they sure looked it early on, getting off to a slow, sloppy start. It didn't help that Dieng looked petrified of Davis and Siva was playing at hyperspeed, a pace Pitino has been trying to get him to tone down all year.

When they tried to go inside, Davis was less forgiving than a bouncer at a Hollywood club. When the Cardinals went outside, the Wildcats swarmed and forced them to take off-balance shots. Meanwhile, on the other end, Kentucky scored at will, repeatedly picking on Siva and Dieng.

But there's a reason Pitino has taken three teams to the Final Four. He pulled out every trick he had, switching strategies, begging the refs for calls and finding a way - finally - to calm his team down.

"Any time you don't know whether a team is better offensively or defensively, you know you've got a great basketball team," Pitino said. "And Anthony Davis is incredible."