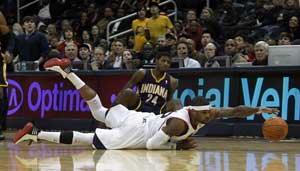 The Hawks, who had fallen behind by big margins in each game on the homestand, finally got off to a good start. Atlanta built a 21-point lead in the first half and withstood a charge by Indiana over the final two quarters.

Joe Johnson added 20 points for the Hawks, while Kirk Hinrich (17) and Tracy McGrady (13) contributed valuable minutes off the bench.

Danny Granger scored 21 points to lead the Pacers, who couldn't overcome the big deficit after winning the night before at home. Indiana has lost nine straight in Atlanta, a streak dating to 2006.

Comments
Topics mentioned in this article
NBA Josh Smith Atlanta Hawks
Get the latest Cricket news, check out the India cricket schedule, Cricket live score . Like us on Facebook or follow us on Twitter for more sports updates. You can also download the NDTV Cricket app for Android or iOS.