Josh Smith scored 22 points and grabbed 18 rebounds as the Atlanta Hawks built a big lead early, then held on for an 83-74 victory over the Celtics in their opener of the Eastern Conference playoffs on Sunday. 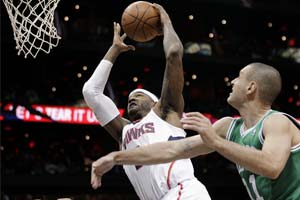 Josh Smith scored 22 points and grabbed 18 rebounds as the Atlanta Hawks built a big lead early, then held on for an 83-74 victory over the Celtics in their opener of the Eastern Conference playoffs on Sunday.

But this one will be remembered for what happened in the final minute, not the Hawks' blistering start. While complaining about a call, Boston star Rajon Rondo was ejected for bumping an official and faces a possible suspension when the teams meet again on Tuesday in Atlanta.

"I didn't intentionally chest-bump him, but that's what it appears to be," Rondo said.

The Hawks, who led by as many as 19 in the first half, were clinging to a four-point lead when Rondo lost his cool with 41 seconds remaining. Boston's Brandon Bass was called for a foul on Smith tussling for a loose ball, with both players sprawled on the court out beyond the foul line. Rondo screamed at official Marc Davis, who quickly called a technical. Rondo then bumped Davis with his chest and was tossed out.

A suspension could be coming, too.

Rondo, who scored 20 points and dished out 11 assists, clearly appeared to stick out his chest to strike the official. That's a huge no-no and will almost surely draw the wrath of NBA Commissioner David Stern.

Getting in some immediate lobbying, Celtics coach Doc Rivers saw things a bit differently than the replay showed. Not surprisingly, he doesn't think Rondo deserves a suspension.

"I'm always worried, but I would be surprised if that happens," Rivers said. "I thought Rondo was walking toward Marc, and Marc turned back toward him, and that's when Rondo bumped him. ... That's all it was, in my opinion. But we'll see."

Rondo had a similar take.

"Obviously I was upset about the call and I said some words to Marc. I deserved the first tech," Rondo said. "As I was walking, I thought he stopped. My momentum carried me into him. I even think I tripped on his foot."

At the beginning, the Hawks looked much quicker and faster than the aging Celtics. With every starter outside of Jason Collins contributing at least four points, Atlanta raced to a 20-6 lead with the game just over 5 minutes old. The Hawks twice pushed the margin as high as 19 points and settled for a 49-35 edge at halftime.

Smith totally outplayed Boston's Kevin Garnett over the first two quarters, going into the break with 15 points, 11 rebounds and two assists. Garnett had only two points on 1-of-9 shooting.

"He was an animal," Atlanta coach Larry Drew said of Smith. "When he's playing with that energy, he just makes us so much better."

Smith had to carry the load. The Hawks' other big gun, Joe Johnson, had a miserable night with 11 points on 3-of-15 shooting, committing more turnovers (four) than he made field goals. He was 0 of 9 from 3-point range.

The Hawks got sloppy with the ball and made only 19-of-54 shots after their blistering performance in opening quarter. That allowed the Celtics to edge back into the game, and it looked as though they might just pull off the comeback until Rondo's big blunder.

Smith said he was definitely fouled as he scrambled for the loose ball with Bass.

"That was the right call they made," Smith said of the potentially series-altering play. "I'm not sure what happened with Rondo. That will be up to the league to see what he did wrong. You never know what's going to happen, but we'll definitely factor him in going to tomorrow."

Garnett bounced back to put up 20 points and 11 rebounds. Paul Pierce had only 12 points, going 5 of 19 from the field and missing all six of his 3-point attempts.

"For us to win, I have to be a better player," Pierce said. "I was a really big culprit."

Both teams were short-handed.

Celtics guard Ray Allen missed a playoff game for the first time in his career, watching from the bench in a suit and tie because of an ailing right ankle. He would've already had surgery if it was earlier in the year, but the 36-year-old member of Boston's Big Three is hoping to heal in time for possibly his last hurrah in Beantown.

The Hawks, meanwhile, started third-stringer Collins at center. Al Horford missed most of the year with a pectoral injury and has been ruled out for the entire series, and the guy who took his place, rugged Zaza Pachulia, went down late in the regular season with a sprained left foot.

Pachulia famously went forehead-to-forehead with Garnett during an opening-round series in 2008, and the Hawks wondered how they would fare without the Georgian's toughness. Just fine, it turned out.

Of course, the teams were much more closely matched heading into this series than they were in their last playoff meeting. In 2008, the Celtics won 66 games and were the top seed in the East, setting up for a run to their most recent NBA championship. The Hawks were the eighth seed, a team that went 37-45 and made the postseason for the first time in nine years. Still, they managed to push the Celtics to seven games.

This time, Boston won the season series 2-1, the three games decided by a total of 10 points, and Atlanta finished one game ahead in the conference standings to earn home-court advantage.

Now the big question is: Will Rondo get to play in Game 2?

Comments
Topics mentioned in this article NBA Josh Smith Atlanta Hawks Rajon Rondo
Get the latest Indian Premier League 2020 news, check out the IPL 2020 schedule, Cricket live score . Like us on Facebook or follow us on Twitter for more IPL 2020 updates. You can also download the NDTV Cricket app for Android or iOS.
Related Articles