Rajon Rondo had his second triple-double in three games, spoiling Harvard graduate Jeremy Lin's return to Boston on Sunday and leading the Boston Celtics to a 115-111 overtime victory over the New York Knicks. 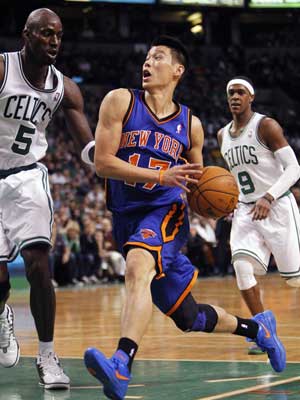 Rajon Rondo had his second triple-double in three games, spoiling Harvard graduate Jeremy Lin's return to Boston on Sunday and leading the Boston Celtics to a 115-111 overtime victory over the New York Knicks.

Rondo had 18 points, 20 assists and a career-high 17 rebounds, and Paul Pierce scored 34 - including a 3-pointer with 4.9 seconds left in regulation to send the game into overtime. Kevin Garnett scored 18 with 10 rebounds, and Ray Allen gave the Celtics the lead for good with a 3-pointer to make it 108-105, then followed it with a fast-break layup - both on assists from Rondo.

Lin picked up two fouls in the first three minutes and struggled to 14 points in 32 minutes. He had five assists and four rebounds while shooting 6 for 16 from the floor.

Lin had one stretch to remind his fans in Boston what the fuss is all about. Boston led 94-89 with 3:35 left in regulation when he sank the second of two free throws, stole the ball and took it in for a layup and then hit a 3-pointer to cut the deficit to one point.

In Lin's last trip to play the Celtics, on February 3, he scored just two points in under seven minutes. The next night, he came off the bench to score 25 points against the New Jersey Nets. He has been in the starting line-up ever since, sparking a seven-game winning streak that rejuvenated the Knicks and gave birth to Linsanity.

The phenomenon has been felt back in Harvard base of Cambridge, Massachusetts too.

Harvard president Drew Gilpin Faust met with Lin before the game, and Harvard coach Tommy Amaker was also at the game one day after the Crimson beat Cornell to clinch at least a share of the Ivy League title.

The rest of the crowd greeted Lin rudely in the first quarter, but two fouls in the first three minutes seemed to eliminate the chance that it would be another big game.

Comments
Topics mentioned in this article
Rajon Rondo NBA
Get the latest Cricket news, check out the India cricket schedule, Cricket live score . Like us on Facebook or follow us on Twitter for more sports updates. You can also download the NDTV Cricket app for Android or iOS.