Jeremy Lin again starred for New York with 19 points to lead the Knicks over the Indiana Pacers 102-88 on Saturday night and improve to 3-0 under Mike Woodson, the team's interim coach. 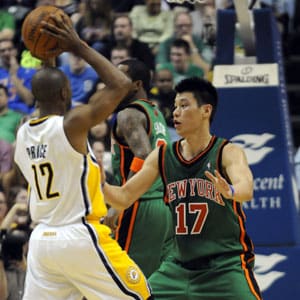 Jeremy Lin again starred for New York with 19 points to lead the Knicks over the Indiana Pacers 102-88 on Saturday night and improve to 3-0 under Mike Woodson, the team's interim coach.

Lin, NBA's first American-born player of Chinese or Taiwanese descent, made it seem almost like a Knicks home game. Hundreds of mostly Asian fans arrived an hour early and surrounded the visitor's entrance to catch a glimpse of their hero, many wearing his No. 17 jersey. During the game, he got the loudest cheers. Lin, who is still adjusting to the enormous amount of attention he has received, was taken aback.

Old-school Pacers like Reggie Miller might have lost their lunches hearing a Knicks player draw cheers in Indiana.

"I think it was a little crazier here than it normally is," Lin said. "That's cool. I didn't know I had any fans in Indiana."

The Knicks have won by an average of 23.7 points since Woodson took over for Mike D'Antoni. New York defeated the Pacers 115-100 on Friday night in New York, and that followed a 42-point victory against Portland in Woodson's first game as coach.

Lin said there hasn't been a major shift in the team's approach since the change of coach.

"I just think it's we have all 15 guys right now on the same page buying in, and that's the biggest thing, is that we're playing together. I don't think there's any major changes philosophically from a coaching standpoint," he said.