Jeff Teague had 19 points and 10 assists, Ivan Johnson scored 21 points and the Atlanta Hawks beat Toronto 109-87 on Monday, their seventh win in eight games against the Raptors. 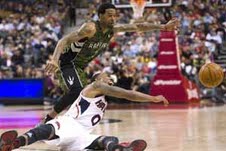 Jeff Teague had 19 points and 10 assists, Ivan Johnson scored 21 points and the Atlanta Hawks beat Toronto 109-87 on Monday, their seventh win in eight games against the Raptors.

Joe Johnson scored 18 points and Josh Smith had 15 points and nine rebounds as the Hawks avenged Sunday's 102-86 home loss to Toronto, a game in which the Raptors never trailed.

Marvin Williams scored 16 for Atlanta and former Raptors star Tracy McGrady scored nine of his 11 points in the fourth quarter.

The victory allowed the Hawks to remain tied with Orlando, which earned a home win over Philadelphia earlier Monday, for fifth place in the Eastern Conference. Atlanta, which finishes its season with five home games, owns the tiebreaker with the Magic.

Leading 79-68 to begin the fourth, the Hawks pulled further away with an 8-0 run to start the final quarter, including three points from Tract McGrady and a 3 by Joe Johnson.

Anderson stopped the run with a 3 but Toronto never recovered and was unable to get the deficit below 15 points the rest of the way.

DeRozan had 11 points in the first quarter and James Johnson came off the bench to score seven, but Williams hit a 3 with less than a second left to pull the to 32-30 after 12 minutes.

James Johnson scored eight points in a dunk-filled second quarter, with the teams combining for six slams, four by the Raptors. Teague answered with eight points and Ivan Johnson and Williams each had six for Atlanta, which led 54-51 at halftime.

Toronto scored just four points in the final 3:12 of the third as Atlanta turned a 67-64 edge into a 79-68 lead heading into the fourth. Teague scored eight points in the third and Ivan Johnson had seven.

Comments
Topics mentioned in this article
NBA Marvin Williams Toronto Raptors Atlanta Hawks
Get the latest Cricket news, check out the India cricket schedule, Cricket live score . Like us on Facebook or follow us on Twitter for more sports updates. You can also download the NDTV Cricket app for Android or iOS.