LeBron James scored 32 points, and Dwyane Wade added 31 points and eight assists as the Miami Heat held off the Houston Rockets 114-108 on Wednesday. 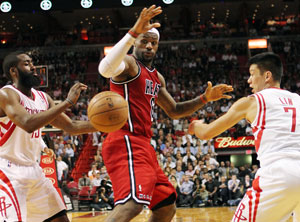 LeBron James scored 32 points, and Dwyane Wade added 31 points and eight assists as the Miami Heat held off the Houston Rockets 114-108 on Wednesday.

James Harden finished with 36 points and 12 rebounds for Houston.

Tony Parker added 31 points and eight assists and Kawhi Leonard finished with 19 points and 10 rebounds for the Spurs.

Nikola Pekovic had 21 points and 10 rebounds for the Timberwolves.

Harrison Barnes and Klay Thompson had 19 points each for the Warriors.

LaMarcus Aldridge had 27 points and 10 rebounds a week after he beat the Mavericks at the buzzer in Portland.

Martel Webster added 19 for Washington, which has won just 13 games, but has beaten five of the six NBA division leaders.

The Clippers rallied behind Eric Bledsoe's had 27 points, including 19 in the second half, to down the Orlando Magic 86-76 and end a three-game losing streak, while Kevin Garnett scored a season-high 27 points with 10 rebounds as the Boston Celtics edged the Toronto Raptors 99-95 for their fifth straight win.

In other games, the Atlanta Hawks beat the Memphis Grizzlies 103-92, the Brooklyn Nets defeated the Detroit Pistons 93-90, the New Orleans Hornets downed the Phoenix Suns 93-84 and the Utah Jazz were 100-86 winners over the Milwaukee Bucks.

Comments
Topics mentioned in this article
Chris Paul Blake Griffin NBA
Get the latest Cricket news, check out the India cricket schedule, Cricket live score . Like us on Facebook or follow us on Twitter for more sports updates. You can also download the NDTV Cricket app for Android or iOS.