LeBron James scored 28 points before taking the fourth quarter off, Mike Miller added 13 points and the Miami Heat continued tuning up for the postseason by pulling away in the second half to beat the Toronto Raptors 96-72 on Wednesday. 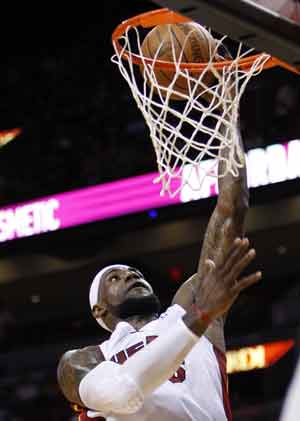 LeBron James scored 28 points before taking the fourth quarter off, Mike Miller added 13 points and the Miami Heat continued tuning up for the postseason by pulling away in the second half to beat the Toronto Raptors 96-72 on Wednesday.

The Raptors tied a franchise-worst with 23 points in the second half, matching what they managed in a first half against Washington in 2003, and Toronto coach Dwane Casey lauded Miami afterward.

"They play the right way," Casey said. "They have the star power to do it. My hat's off to Miami. They're a great team. I'm going to enjoy watching them. I hope my guys were watching and learning and that they learned from tonight and how fast and how physical the game is for 48 minutes. Not 24 minutes, 48 minutes."

James made 12 of his 15 shots for Miami, which also got 10 points from Udonis Haslem. The Heat, who can now finish no worse than No. 2 in the Eastern Conference, played without Dwyane Wade and Chris Bosh, both given the night off for what Miami calls "maintenance" of some nagging aches and pains.

James Johnson scored 18 points, Alan Anderson added 15 and DeMar DeRozan had 12 for Toronto, which fell for the sixth time in eight games.

"I know the guys will be looking forward to it," Heat coach Erik Spoelstra said. "We have a very competitive group."

Toronto led by as many as seven in the first half, then lost the lead after Miami outscored the Raptors 19-10 over the final 5:19 heading into the break.

The last two of those Miami points were by far the most impressive.

As the Heat were trying to get what likely would have been the last quality shot of the half, Johnson stole the ball from Mario Chalmers, and Gary Forbes' layup dropped through the net with 2.5 seconds left in the half to tie the game at 49-all.

Plenty of time for Miami.

Miller grabbed the ball as it fell through the net and went into a three-step drop, much like a quarterback, and threw about a 70-foot pass intended for James - whose high school wide-receiver skills came in handy. James reached high with his right arm to make a one-handed catch near the 3-point line, whirled around to find both James Johnson and Amir Johnson in his path, dribbled once and laid the ball in just before the halftime horn sounded.

By the time the shot went in, the Heat bench was already standing in celebration. Wade did a little dance before slapping hands with James, and the Heat skipped into the locker room up 51-49.

"It was a great pass, first of all," James said. "I was able to just go up and get it. I looked at the opposite clock ... and I knew I had enough time."

James said before the game that he'd like to get a game or two off before the playoffs start, if the race for seeding permits.

The Raptors wouldn't have minded Wednesday being one of those games. But James isn't complaining that he was out there playing.

"It's just how I am," said James, who entered Wednesday having played the sixth-most minutes in the league this month, the fifth-most in the league for the entire season. "When I go on the floor, if I'm in uniform, I'm trying to play at the highest level. If I'm in uniform, I don't try to take minutes off or take games off when I can. ... I just want to be the best."

If nothing else, those with MVP votes are seeing plenty from James, who has already won that award twice and is considered one of the frontrunners for the trophy this year, along with Oklahoma City's Kevin Durant. James said it's humbling to be in that conversation, but also knows things like scoring Miami's final 17 points to save the Heat from what would have been an embarrassing loss at New Jersey on Monday certainly could generate some voter attention.

James made his first three shots of the third quarter - making him 10 for 11, having converted nine straight to that point,Â  with the last of those being a 3-pointer as the shot clock was expiring to make it 62-53. Miami outscored Toronto 23-11 in the third, and James found Juwan Howard for a basket late in the quarter that gave the Heat what was then their biggest lead at 74-58, a play the two-time MVP celebrated by punching the air at midcourt.

Soon afterward, he took a seat on the bench for the rest of the evening. Tip-off against Chicago on Thursday was a mere 221/2 hours away.

Comments
Topics mentioned in this article
Mike Miller NBA Toronto Raptors
Get the latest Cricket news, check out the India cricket schedule, Cricket live score . Like us on Facebook or follow us on Twitter for more sports updates. You can also download the NDTV Cricket app for Android or iOS.