LeBron James finished with 40 points, 18 rebounds and nine assists and Dwyane Wade had 30 points as the Miami Heat beat the Indiana Pacers 101-93 Sunday to level their series at 2-2. 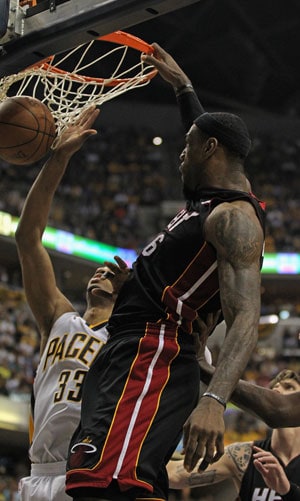 LeBron James finished with 40 points, 18 rebounds and nine assists and Dwyane Wade had 30 points as the Miami Heat beat the Indiana Pacers 101-93 Sunday to level their series at 2-2.

Wade also had nine rebounds and six assists for the Heat, which rebounded from an embarrassing 94-75 loss in game three in which Wade didn't hit his first shot until the third quarter.

But Wade and James were back on the mark Sunday and they now head home to Miami for game five of the Eastern Conference series on Tuesday, where they will try to take a 3-2 series lead.

James and Wade scored 48-of-50 points for the Miami in the time between the end of the second quarter and the early part of the fourth.

"They've been through quite a few battles," Heat coach Erik Spoelstra said of James and Wade.

"We went through quite a bit last year. All the series we went through were highly-competitive, so they understand with one of our main components out that they have to step up."

Miami is still smarting from the loss of forward Chris Bosh, who went down in game one with a lower abdominal strain and isn't expected to be available for the series.

Heat forward Udonis Haslem chipped in late in the game, scoring eight of his 14 points in the fourth quarter.

Danny Granger led the Pacers with 20 points, Darren Collinson came off the bench to score 16 while Paul George had 13 and Roy Hibbert added 10.

The Pacers looked to be in control in the opening stages of the game Sunday before James and Wade took over.

"We're a complete team. We've handled runs like that all year," said Indiana coach Frank Vogel. "We tried to handle it, but we didn't handle it enough.

"You get the ball out of one of those guys' hands," said Vogel, "and it finds its way to the other guy."

The Pacers regrouped and pulled within 76-70 at the end of the third.

The Heat led by nine points with under five minutes remaining and Indiana cut the deficit to five points with 1:35 left but that was a close as they would get.

The Pacers, who started the game on a 9-0 run, took exception to Wade's rough treatment of Hibbert during the second quarter.

Wade and Granger got in each other's faces after Wade was wrapped up under the basket by Hibbert on a hard foul.

Wade pushed Hibbert's hand away even though it appeared that Hibbert was trying to hold him up and then words were exchanged.