David West scored 16 points and grabbed 10 rebounds, and the Pacers took home-court advantage away from Miami by beating the Heat 78-75 in Game 2 of the teams' Eastern Conference semifinal series on Tuesday, after LeBron James and Dwyane Wade both came up short on key opportunities in the final minute. 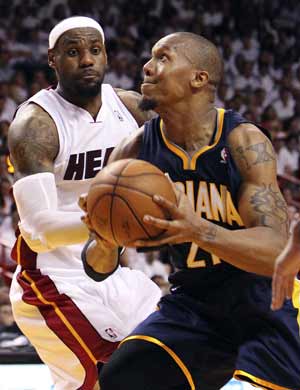 David West scored 16 points and grabbed 10 rebounds, and the Pacers took home-court advantage away from Miami by beating the Heat 78-75 in Game 2 of the teams' Eastern Conference semifinal series on Tuesday, after LeBron James and Dwyane Wade both came up short on key opportunities in the final minute.

"Defense and rebounding," Indiana coach Frank Vogel said. "We built this team, we started talking about smash-mouth basketball, about winning the war in the trenches, and that's with defense and rebounding. That's what I grew up watching Eastern Conference basketball being like. We understand offense is going to come and go, especially like a great defensive team like these guys ... but we're pretty good, too."

The series is tied at 1-1, with Game 3 in Indianapolis on Thursday.

James scored 28 points for Miami and Wade finished with 24, though both failed to convert big chances late. James missed two free throws with 54.3 seconds left and Miami down one, and Wade was short on a layup that would have tied the game with 16 seconds remaining. Moments later, a few of the Pacers were leaping in celebration at midcourt of Miami's floor, something that Wade said was noticed afterward.

"The game is not lost or won with two free throws," James said. "But I definitely want to come through for my teammates. So I'll get an opportunity again. I know I'll be at the line again in that situation. Just go up and make 'em."

Miami was without Chris Bosh, who's sidelined indefinitely, almost certainly the rest of the series, possibly longer if the Heat advance - after he strained a lower abdominal muscle in Game 1.

After Wade's missed layup that would have tied the game, he remained on the court for a few extra seconds, looking exhausted until James-who said Wade would make that shot "10 out of 10 times", pulled him up.

"Chris was missed, no doubt about it," Wade said, after he and James outscored Indiana 21-17 in the fourth. "But that's not the reason we lost this ball game."

The Heat were outscored 28-14 in the third quarter, shooting 3 for 17 in that period. They didn't score in the final 2:41 of the game, and when Mario Chalmers missed a 3-pointer that would have tied it on the last play, Miami dropped to 1 for 16 from 3-point range on the night, 1 for 22 in the series.

"Welcome to the playoffs, for us," Heat coach Erik Spoelstra said. "That's how we're viewing it. This series has started. They won on our home court. Now we have to collect ourselves, gather ourselves and get ready for Game 3. That's all that matters right now."

George Hill had 15 points, Danny Granger scored 11 and Paul George added 10 for Indiana, which made only 38 percent of its shots. The Pacers had been 2-9 this season when shooting that poorly, yet got a split in Miami anyway.

James had a chance to give Miami the lead with 1:22 left, but his shot was blocked from behind by George, who was fouled two seconds later. He missed both free throws, keeping the Indiana lead at 76-75. And after Wade missed a jumper, James was fouled by Granger-his sixth-battling for the rebound with 54.3 seconds remaining.

James missed both shots, and Indiana held on from there.

"Their third-leading scorer had five points and that's what you want to do," Granger said. "If LeBron James gets 11 assists they are probably going to win. They scored a lot, but we stopped everyone else."

Emotions picked up considerably in the fourth.

Wade was steaming when he missed a shot after trying to create contact with Indiana's Dahntay Jones with 9:53 left. As Wade argued, Jones went the other way and set Leandro Barbosa up for a score that put the Pacers up 63-56.

Chalmers turned the ball over on the next possession, and as the Pacers took off for what set up as a 2-on-none break, Wade caught Darren Collison from behind and knocked him over. A flagrant-1 was called, Collison hit both free throws, the Indiana lead was nine and tensions were suddenly high.

It all seemed to spark Miami.

The Heat scored the next six points. James, who got hit in the head by Granger with 7:25 left, sparking a bit of shoving that led to double-technicals given to both players - added a putback off an offensive rebound and Wade did the same about a minute later, getting Miami within 69-66 with 5:57 left.

The whole game was a grind. Indiana scored 16 points in the first seven minutes of the first half, then scored 17 in the next 17 minutes. And even after a drought like that, Miami's lead was only 38-33 at the break. Miami was 0-for-7 on shots that would have pushed its margin to double digits in the first half.

"Playoffs," George said, "are about grinding it out."

James missed a free throw that would have tied it with 4:30 remaining, but after George got the rebound, James dove in to create a jump ball situation. The MVP easily won the tap, sending it to Wade, whose bank shot over West put Miami back on top 72-71.

Barbosa scored on the next Indiana possession. The Pacers weren't rattled, and never trailed again.

"We never felt like we were the underdogs," Granger said.