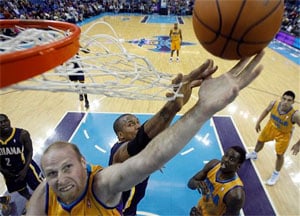 David West had 14 points and 13 rebounds in his first game back in New Orleans after playing the first eight years of his career with the Hornets. Darren Collison added 13 points, including a circus shot at the halftime buzzer.

Jarrett Jack scored 18 and Marco Belinelli added 15 for New Orleans, which played its third game in four days and dressed only nine players for the second consecutive night.