David West had 18 points and 11 rebounds to help the Indiana Pacers beat the Orlando Magic 93-78 on Monday and even the Eastern Conference first-round series at one game apiece. 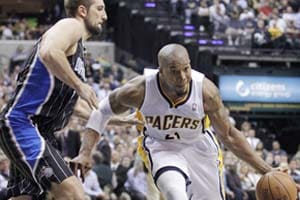 David West had 18 points and 11 rebounds to help the Indiana Pacers beat the Orlando Magic 93-78 on Monday and even the Eastern Conference first-round series at one game apiece.

Danny Granger and George Hill each added 18 points and Paul George had 17 points and eight rebounds for Indiana.

Glen Davis led the Magic with 18 points and 10 rebounds, but he shot 5 for 16 from the field. J.J. Redick scored 13 points and Jameer Nelson added 12 for Orlando.

The Pacers were heavy favorites in the series because Dwight Howard, Orlando's All-Star center, is out with a back injury. Indiana lost Game 1 81-77 on Saturday, and the frustrated Pacers fought hard to avoid taking a two-game deficit to Orlando on Wednesday.

The Pacers won despite making just 2 of 20 3-point attempts and Granger, the team's leading scorer this season, shooting just 7 for 21 from the field.

Orlando led 44-42 at halftime despite shooting just 32 percent from the field. The Magic stayed in the game with 12 offensive rebounds. Davis had 14 points and eight rebounds in the first half.

Granger hit a 3-pointer to tie the game early in the third quarter, then Hill made a layup to give the Pacers a 54-52 lead with 7:17 left and bring an uneasy crowd back into the game.

Granger's three-point play extended Indiana's lead midway through the quarter, and a 3-pointer by Hill made it 64-55 and forced Orlando to call a timeout. The Pacers outrebounded the Magic 12-1 during their 22-11 run to start the second half.

George's stepback jumper on the baseline as the shot clock expired gave Indiana a 78-64 lead with 9 minutes to play, and his three-point play 2 minutes later pushed the lead to 15. scored 25 points, Chris Bosh added 21 and LeBron James finished with 19 points, nine assists and seven rebounds for the Heat as they beat the New York Knicks 104-94.


Everything the Heat did seemed like old news quickly after the game, when all anyone really wanted to talk about was what was going on in the Knicks locker room. Miami-Dade paramedics, who staff every game, were summoned while reporters were kept outside much longer than the typical 10-minute cooling-off period.

"I really don't know what's the situation with that," said Knicks forward Carmelo Anthony, who said he was "on the court" when whatever happened with Stoudemire occurred.

Anthony scored 30 points on 12-for-26 shooting for New York, which got 18 points from Stoudemire and 13 apiece from Tyson Chandler and J.R. Smith. The only other team to lose 12 straight playoff games is the Memphis Grizzlies, who dropped their first dozen postseason contests from 2004 through 2006.

New York's last postseason win came April 29, 2001. The Knicks get another chance to snap the drought Thursday when they host Game 3.

Mario Chalmers scored 13 points and Mike Miller and Shane Battier each shot 3 for 5 from 3-point range on their way to 11-point games for the defending East champion Heat, who shot 52 percent.

"Every game we try to find our shooters, get them comfortable in the offense and once they catch them, they can let it fly," James said. "It was concerted effort tonight to get them the ball and move the ball from one side to the other."

Baron Davis, who sat most of the first half and has been battling back issues, finished with 12 points for the Knicks.

Along with the Grizzlies, the Knicks were one of four teams in NBA history with 11-game postseason losing streaks, according to STATS LLC, joining Denver (1988-94) and the Baltimore Bullets (1965-70).

The Heat came into the game saying they expected Anthony to be much more aggressive. They were right.

Anthony opened with an 11-shot quarter, the last time someone took more in the first 12 minutes of a playoff game was May 15, 2006, when Richard Hamilton got 12 shots off for Detroit against Cleveland. Anthony missed all seven of the jumpers he took in Game 1 when guarded by James, then got his first one to fall on the game's first possession Monday.

By halftime, Anthony was up to 21 points on 9-for-18 shooting, the Knicks needing all that and more. Wade, James and Bosh combined for 41 points in the first two quarters, helping Miami take a 53-47 lead.

Unlike Game 1, it wasn't over by halftime. And play was heated, just not overheated.

Chandler, who set a back pick that sent James tumbling late in Saturday's first half, picked up a technical for taunting early in the second quarter when he went over Miller for a putback dunk and then glared at him for a few moments. A few minutes later, James did a fist-pump toward the seats after a layup late in the half.

But whenever Miami was on the cusp of pulling away, New York had answers.

Consecutive baskets by James midway through the third quarter, the second of those good enough for him to merit it worthy of a chest-bump and long look at the Knicks bench, put Miami up 67-56, then its biggest lead. Four minutes later, the Knicks were within four, a dunk by Chandler making it 72-68 with 1:37 left in the period.

Miami's margin was back to nine after a flurry ended the quarter. James drove right and got just about every Knick to shift with him, leaving Battier all alone for a 3-pointer, and James' three-point play as the shot clock was running down had him laughing and the Heat up 78-69 going into the fourth.

The Knicks never got any closer, and the Heat wound up holding serve at home.

"We did what we're supposed to do," Heat coach Erik Spoelstra said. "It's not anything more than that. We're already trying to leave this game behind."