Danny Granger ensured the Pacers will be fresh for whichever team advances, scoring 25 points to help Indiana eliminate the Orlando Magic with a 105-87 victory in Game 5 on Tuesday. 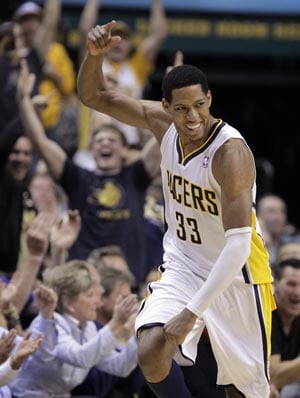 Danny Granger ensured the Pacers will be fresh for whichever team advances, scoring 25 points to help Indiana eliminate the Orlando Magic with a 105-87 victory in Game 5 on Tuesday.

"We haven't been in this position for six, seven years," he said. "Just to finally be back in the playoffs, finally to be competing for a championship as a high seed, is a great place for us to be right now."

It was Indiana's first series win since 2005 and its first clincher on its home court since the first round of the 2000 playoffs. Darren Collison scored 15 of his 19 points in the fourth quarter and George Hill added 15 points for the Pacers, who trailed by two at the end of the third quarter but outscored the Magic 36-16 in the final 12 minutes.

Hill, an Indianapolis native who grew up a Pacers fan, enjoyed the crowd.

"Fun to be a part of," he said. "It's a blessing. The support that we had today, it reminded me of the Pacers back in the day. To be a part of it was fun."

Jameer Nelson led Orlando with 27 points and made 5 of 8 3-pointers. Glen Davis, a thorn in Indiana's side throughout the series, scored 15 but made just 6 of 17 shots. The Magic made just 5 of 16 shots in the fourth quarter.

Collison made a layup and hit a 3-pointer to give the Pacers a 78-73 lead with 9:33 to play. After Nelson drained another 3, Collison came back with a layup, then Leandro Barbosa's steal and layup pushed Indiana's lead to 87-80 with 6:49 to play and forced an Orlando timeout. A few minutes later, Indiana's Paul George stole an inbounds pass and found Granger under the hoop for a layup and a 91-80 lead. The Pacers dominated from there.

Indiana led by as many as 15 points in the first half, but as was the case throughout the series, it didn't last. Orlando got hot late in the half, and a 3-pointer by Jason Richardson and a bucket by Davis cut Indiana's lead to 48-47. Indiana's Roy Hibbert made a hook shot to push the lead back to three at the break.

A putback by Ryan Anderson gave Orlando a 51-50 lead early in the third quarter.

Hill added nine points in the period to keep the Pacers in the game before Collison and Granger put it away.

Comments
Topics mentioned in this article
NBA Ryan Anderson Orlando Magic Dwight Howard
Get the latest Cricket news, check out the India cricket schedule, Cricket live score . Like us on Facebook or follow us on Twitter for more sports updates. You can also download the NDTV Cricket app for Android or iOS.