India will have a player in NBA in five years: David Stern

There was speculation about the NBA signing a deal with Mukesh Ambani-owned IMG Reliance to start a pro-basketball league in India. IMG Reliance has a 30-year partnership with the BFI to develop basketball at every stage, from grassroots to a professional league. 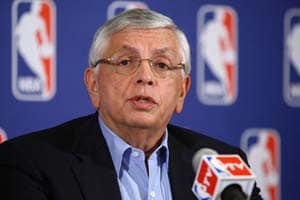 With an increasing number of foreign players making to the top in the professional basketball league, National Basketball Association (NBA) Commissioner David Stern on Monday said that an Indian hoopster could be seen playing in the league in the next five years.

"We already had a woman (Geetu Anna Jose) try out for WNBA and we would expect to have men and women showing up for each of our professional leagues. If you need a specific answer, I would say five years," Stern told reporters here on his maiden visit to India.

"If we get our grassroot programmes going bigger and kids across this country start bouncing the ball rather than kicking it or hitting it with a strange paddle, there will be an enormous influx of very good and talented athletes into our game.

"If you had asked me 20 years ago, I would have said I don't know. Now 85 out of our 400 players are born outside the USA. It depends on individual athlete and how they are going to go about. The one thing we do is to work as close as possible with the Basketball Federation of India through grassroots and other events to make it as easy as possible for elite Indian athletes to spend more time playing basketball," he added.

Stern has been the NBA commissioner for nearly three decades and said India would have to wait for a few years to have its own professional league.

"I think that (professional league in India) is couple of years away at least," he said.

There was speculation about the NBA signing a deal with Mukesh Ambani-owned IMG Reliance to start a pro-basketball league in India.

IMG Reliance has a 30-year partnership with the BFI to develop basketball at every stage, from grassroots to a professional league. The BFI had granted IMG Reliance the commercial rights, including sponsorship, advertising, broadcasting, merchandising, film, video and data, intellectual property, franchising and new league rights.

"We don't consider ourselves to be stuck in any place at all but just with a great upside. We continue to have excellent relations with BFI and we continue to dialogue with our good friends at Reliance and IMG. As we have said we have had discussions in the past and they are on going. We have seen that we complement each other very well in our activities," he said.

The NBA with its broadcast partner Multi Screen Media (that operates Sony Six) and an NGO Magic Bus announced a partnership to develop NBA Cares programme that will promote education, health and fitness in boys and girls aged 7-14, starting from June.

Comments
Topics mentioned in this article
NBA Wayne Rooney
Get the latest Cricket news, check out the India cricket schedule, Cricket live score . Like us on Facebook or follow us on Twitter for more sports updates. You can also download the NDTV Cricket app for Android or iOS.