The Houston Rockets opened its season with a stirring 105-96 victory over the Detroit Pistons on Wednesday thanks to James Harden's 37 points and 12 assists. 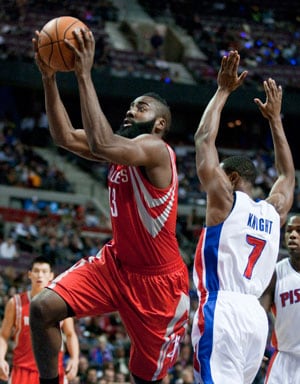 The Houston Rockets opened its season with a stirring 105-96 victory over the Detroit Pistons on Wednesday thanks to James Harden's 37 points and 12 assists.

Detroit led 83-72 early in the fourth before Carlos Delfino four 3-pointers and Harden shifted the momentum to Houston.

Houston acquired Harden on Saturday in a trade with Oklahoma City and agreed Wednesday on a five-year, $80 million contract extension with him.

At Toronto, George Hill scored the go-ahead basket with two seconds left to complete the Indiana Pacers' rally for a season-opening 90-88 win over the Raptors.

David West scored 14 of his 25 points in the fourth quarter, and Paul George had 14 points and 15 rebounds for the Pacers, who trailed 84-74 with just under six minutes left. Roy Hibbert added 14 points for Indiana.

Kyle Lowry led Toronto with 21 points, and Jonas Valanciunas had 12 points and 10 rebounds in his NBA debut. Andrea Bargnani had 16 points, and Jose Calderon added 15 for the Raptors.

San Antonio's Tim Duncan scored 24 points and Tony Parker hit a huge 3-pointer as the Spurs opened the season with a 99-95 victory over the New Orleans Hornets in the debut for top draft pick Anthony Davis.

In other games, Joakim Noah scored 23 points and grabbed 10 rebounds in the Chicago Bulls' 93-87 win over Sacramento Kings. Richard Hamilton added 19 points, while Carlos Boozer chipped in with 18 points and eight rebounds.

Spencer Hawes had 16 points and 12 rebounds to lead the Philadelphia 76ers to an 84-75 win over the Denver Nuggets, while Mo Williams and Marvin Williams each scored 21 points to lead the Utah Jazz to a 113-94 victory over the Dallas Mavericks.

Golden State's Carl Landry scored 12 of his 17 points in the in the fourth quarter as the Warriors overcame an awful post-contract night by Stephen Curry to edge past the Phoenix Suns 87-85 in the teams' season opener.

Curry, who earlier in the day agreed to a four-year, $44 million extension with the Warriors, missed his first 10 shots from the field and wound up 2 of 14 with five points.

Comments
Topics mentioned in this article
Blake Griffin Chris Paul NBA
Get the latest Cricket news, check out the India cricket schedule, Cricket live score . Like us on Facebook or follow us on Twitter for more sports updates. You can also download the NDTV Cricket app for Android or iOS.