LeBron James wasn't about to be upstaged by the stars in the crowd, scoring 32 points as the Miami Heat won their 26th straight game with a 109-77 victory over the Charlotte Bobcats. 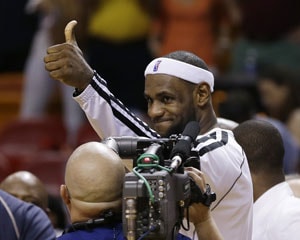 LeBron James wasn't about to be upstaged by the stars in the crowd, scoring 32 points as the Miami Heat won their 26th straight game with a 109-77 victory over the Charlotte Bobcats.

Some of the world's leading sportsmen were watching from courtside on Sunday night. Novak Djokovic, the top-ranked men's tennis player. Wladimir Klitschko, the world heavyweight boxing king. Rory McIlroy, who sits atop the golf rankings for at least one more night.

And James responded with another sterling performance, making 11 of 14 shots while helping Miami move within seven wins of matching the 1971-72 Los Angeles Lakers for the league record of 33 in a row.

"I think it's very humbling that you can have some of the greats from other sports come to see your team play, come to see you play," James said. "You try to leave an impression on them, as a team and as an individual, absolutely. So it was great to have them in the building, for sure."

Chris Bosh and Norris Cole had 15 points apiece for the Heat, who played without Dwyane Wade, held from the lineup because of right knee soreness that the team believes is minor.

The show now goes on the road for a four-game trip that begins in Orlando on Monday, a swing that also will take the Heat to Chicago, New Orleans and San Antonio. And the Heat will start that trip 21/2 games ahead of San Antonio in the race for the NBA's best record.

James Harden sank an off-balance jumper with 4.5 seconds left to lift the Houston Rockets a 96-95 home win over the Spurs.

Harden scored 18 of his 29 points in the second half as the Rockets rallied from three down in the final minute to end a four-game losing streak to their state rivals.

Tony Parker scored 23 points, including 10 in a row to put San Antonio ahead with just under 2 minutes left. The Spurs led 95-94 when Harden got the ball from Omer Asik, drove to the free-throw line and hit the winning jumper with Tim Duncan in front of him.

In other matches, the Hawks had a 104-99 win over the Bucks at Milwaukee, Kevin Durant had 24 points and 10 rebounds as the Thunder beat the Trail Blazers 103-83 at Oklahoma City, the Bulls beat the Timber Wolves 104-97 at Minneapolis, the Mavericks defeated the Utah Jazz 113-108 and the Nets held off the Suns 102-100 at Phoenix.

The Sixers won 117-103 against the Kings, ending their 15-game road skid on the road dating back to New Year's Day against the Lakers.