The Miami Heat extended their NBA winning streak to 13 games with a 98-91 win over the Memphis Grizzlies on Friday, with LeBron James shaking off his worst shooting night of the season to sink a key 3-pointer in the closing seconds. 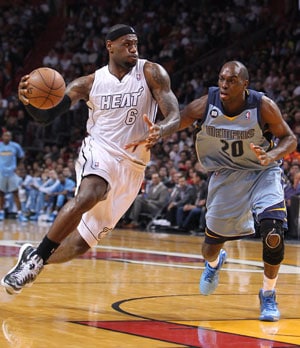 The Miami Heat extended their NBA winning streak to 13 games with a 98-91 win over the Memphis Grizzlies on Friday, with LeBron James shaking off his worst shooting night of the season to sink a key 3-pointer in the closing seconds.

Dwyane Wade scored 22 points for the Heat, who maintained a 6-1/2 game lead in the Eastern Conference.

In other key games, a last-second basket gave Denver a win over Oklahoma City to cut the gap between the division rivals, San Antonio capitalized and increased its West lead to three games by beating Sacramento, Boston notched a home win over Golden State, the Los Angeles Clippers finished strongly to beat Cleveland, and Dallas held on to beat Brooklyn.

Miami's James scored 18 points on a season-worst 4 for 14 shooting, plus added 10 assists and eight rebounds.

Marc Gasol scored 24 for the Grizzlies, who had won their previous eight.

Denver's Wilson Chandler tied his career high with 35 points and Ty Lawson's jumper with 0.2 seconds left lifted the Nuggets to a 105-103 win over Oklahoma City Thunder.

Guarded tightly, Lawson swished his jumper from just inside the 3-point arc on the right wing. With no time to catch and shoot, the Thunder failed to get off a final tip attempt after their timeout.

Russell Westbrook scored a season-high 38 points for the Thunder, who have lost five of their past six road games.

San Antonio's DeJuan Blair scored 16 points off the bench to lead eight players in double figures as the Spurs overcame the loss of Tony Parker to beat the Sacramento Kings 130-102.

The Spurs rebounded from their first home loss in 18 games two nights earlier against Phoenix, but it may have been a costly victory. Parker, the Spurs' leading scorer, went down with a left ankle sprain with 4:40 left in the third quarter and did not return.

Boston's Paul Pierce had 26 points and Jeff Green scored 14 of his 18 in the second half to steer the Celtics to a 94-86 win over the Golden State Warriors.

Boston won despite foul trouble which consigned Avery Bradley and Courtney Lee to the bench for much of the second half, plus some erratic free-throw shooting.

Warriors guard Stephen Curry, coming off a 54-point performance Wednesday in a loss at New York, was held to 25 on 6-of-22 shooting.

Los Angeles' Jamal Crawford scored 24 points, making a pair of 3-pointers in the fourth quarter, and Chris Paul had 15 assists as the Clippers ran away in the final period for their first win in Cleveland since 2002, beating the Cavaliers 105-89.

The Clippers had lost 10 straight at Quicken Loans Arena.

Blake Griffin had 16 points and 11 rebounds as the Clippers, having their best season in franchise history, won their fourth in a row and were able to rest the starters in the closing minutes.

Dallas' Dirk Nowitzki and Vince Carter each scored 20 points as the Mavericks avoided another late collapse and beat the Brooklyn Nets 98-90.

Dallas led by as many as 20 points, then looked as if it might repeat its performance from its previous game, when it blew a 25-point lead against Memphis. But the Mavericks steadied and ended their three-game losing streak.

Deron Williams scored 17 of his 24 points in the first half in his first game against Dallas since deciding to remain with the Nets instead of signing with the Mavericks last summer.

Indiana's Paul George had 22 points and 10 rebounds while David West had 15 points and 11 rebounds as the Pacers beat the Toronto Raptors 93-81.

Phoenix's Marcus Morris tied his career high with four 3-pointers, in five attempts, and scored 16 points in his fifth game with the team, helping the Suns win their third in a row with a 92-87 victory over the Atlanta Hawks.

New York's Carmelo Anthony scored 30 points, Raymond Felton added 23 and J.R. Smith chipped in with 13 points and 12 rebounds as the Knicks used some strong defense to beat the Washington Wizards 96-88.

Houston's James Harden had 24 points, and Chandler Parsons and Carlos Delfino added 21 apiece as the Rockets rallied in the fourth quarter to beat the Orlando Magic 118-110.

Utah's Enes Kanter had career highs with 23 points and 22 rebounds in a rare start, helping the Jazz rout the Charlotte Bobcats 98-68 and snap a three-game losing streak.

New Orleans' Greivis Vasquez capped a 25-point, nine-assist performance by hitting a running floater off the backboard with 12 seconds left to lift the Hornets to a 100-95 win over the Detroit Pistons.

Comments
Topics mentioned in this article
NBA Marina Erakovic
Get the latest updates on IPL 2021, IPL Points Table , IPL Schedule 2021 , live score . Like us on Facebook or follow us on Twitter for more sports updates. You can also download the NDTV Cricket app for Android or iOS.