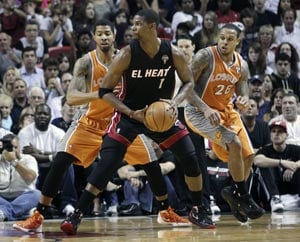 James finished with 20 points, Dwyane Wade had 19, and Udonis Haslem added a season-high 15 for the Heat. James was chasing a long pass when he collided with Grant Hill in the final minute. he went down, failing on his first attempt to get up and stayed on the court holding his head for about a minute. He remained in the game.

Comments
Topics mentioned in this article
Phoenix Suns NBA
Get the latest Cricket news, check out the India cricket schedule, Cricket live score . Like us on Facebook or follow us on Twitter for more sports updates. You can also download the NDTV Cricket app for Android or iOS.