Jordan turned high-leaping slam dunks, clutch game-winning baskets and defensive determination into performance art for the Chicago Bulls, leading them to NBA titles from 1991-1993 and 1996-1998 with a retirement in between. 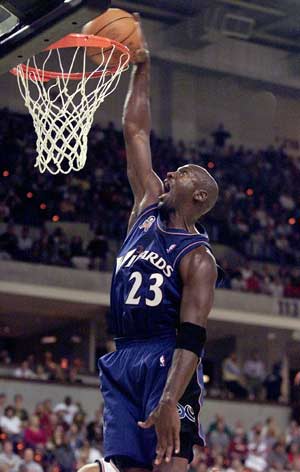 Michael Jordan, the basketball superstar who won six NBA crowns and boosted the sport's worldwide appeal, celebrates his 50th birthday on Sunday with a powerful legacy 10 years after his final game.

Jordan, cut from his high school team as a sophomore, used that slight and every other he faced as inspiration to ignite a career like no other, becoming in the eyes of many the greatest player to ever dribble a basketball.

"It's simple," Miami Heat star guard Dwyane Wade said. "There will never be another Michael Jordan. He was the first to do a lot of things. Whenever you are the first, there can never be another."

Jordan turned high-leaping slam dunks, clutch game-winning baskets and defensive determination into performance art for the Chicago Bulls, leading them to NBA titles from 1991-1993 and 1996-1998 with a retirement in between.

When US college stars proved unable to win Olympic gold in 1988 at Seoul, Jordan led a "Dream Team" all-star squad of NBA icons to Barcelona in 1992 and launched a new era for the sport with a dominant effort and rock-star treatment by fans.

"Air Jordan" sneakers remain among the best sellers today, Jordan's impact on sports marketing thanks to Nike and others being as groundbreaking as his efforts on the court.

The memory of Jordan's feats is so great and recent that 28-year-old LeBron James, the NBA's current top playmaker whose acrobatic leaps and spectacular moves draw comparisons to Jordan, has become weary of the linkage.

"Happy birthday to him. I wish him the best," James said. "No comparison. People always want to find ways to compare someone to someone. But Mike is Mike and I'm LeBron and I'm trying to make my own name, make my own statement."

Asked whether he would pick Los Angeles Lakers guard Kobe Bryant or James as more successful at this point, Jordan told NBA TV he would pick Bryant.

"Five beats one every time I look at it," Jordan said, referring to Bryant's five NBA championships to only one for James.

More than 22 million people have "liked" Jordan's Facebook page and more than 1,700 have left him "Happy Birthday" messages -- technology that did not even exist when Jordan was in his prime 20 years ago.

Sports Illustrated features Jordan on its cover this week, the 50th time Jordan has been so honored.

Jordan was named the NBA Finals Most Valuable Player every year his team won a title and won the regular season version of the award five times. Jordan also won 10 NBA scoring crowns, from 1987-1993 and 1996-1998.

After a stellar college career at North Carolina, Jordan became the 1985 NBA Rookie of the Year and became a legend with the Bulls.

But in July 1993, tragedy struck Jordan when his father, James Jordan, was killed at a highway rest area. Three months later, Jordan shocked the sports world by retiring from the NBA at his prime.

Jordan began playing baseball, the American pastime, chasing a dream that his late father had for his son to play in the Major Leagues. Jordan signed with the Chicago White Sox and played with a minor-league team two levels below the elite leagues.

In 1994, the Bulls retired Jordan's jersey number 23, and erected a statue of Jordan outside the team's home arena that remains a popular tourist destination.

In March 1995, however, Jordan dropped his baseball dream with a simple two-word statement -- "I'm back" -- and scored 19 points in his return with the Bulls at Indiana. He wore jersey number 45, what had been his baseball number.

The Bulls lost in the second round of the playoffs, helping prompt Jordan to reclaim his former number, 23, and in the next three full seasons, Jordan used his savvy and leadership to replace what time had taken from his body to lift the Bulls back into championship form until retiring again in 1999.

But his second retirement did not last either. Jordan returned in 2001 to play for the NBA's Washington Wizards for two seasons but parted ways with the team after not being allowed to return to his prior post as director of basketball operations.

In 2010, Jordan returned to the NBA as the owner of the Charlotte Bobcats, but he has been unable to work the same magic with them as he did on the court with the Bulls.

Comments
Topics mentioned in this article Washington Wizards Minnesota Timberwolves New York Knicks NBA
Get the latest Indian Premier League 2020 news, check out the IPL 2020 schedule, Cricket live score . Like us on Facebook or follow us on Twitter for more IPL 2020 updates. You can also download the NDTV Cricket app for Android or iOS.
Related Articles