Stephen Curry was having a relatively quiet and even puzzling night - he missed his first three free throws - before helping the Golden State Warriors regain control against a team that nearly beat them this season and looked capable of finishing the job this time. 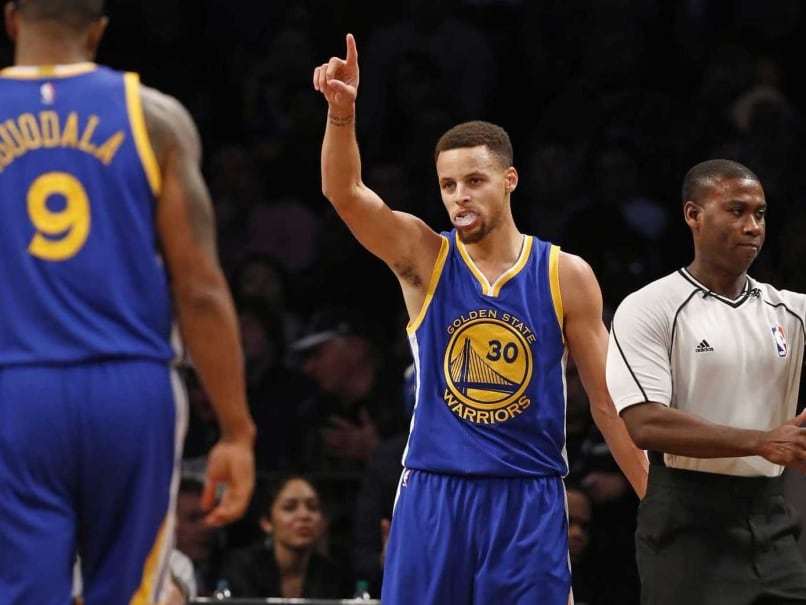 Golden State improved their NBA-record season start to 22-0 by beating Brooklyn 114-98 on Sunday, with a generally subdued Stephen Curry still proving decisive for the Warriors, scoring 16 of his 28 points in the third quarter.

Among other results, Memphis needed a last second dunk by Jeff Green to beat Phoenix, and Wesley Matthews starred as Dallas overcame Washington.

Already owners of the best-ever start to a season, Golden State moved to within one win of the 2012-13 Miami Heat for the second-longest winning streak at any point of a season.

Coming off consecutive 40-point games, Curry was having a relatively quiet and even puzzling night - he missed his first three free throws - before helping the Warriors regain control against a team that nearly beat them this season and looked capable of finishing the job this time.

Memphis' Green jammed in a dunk on an alley-oop inbound pass from Courtney Lee with 0.5 seconds left to give the Grizzlies a 95-93 victory over Phoenix.

The Suns' last chance to tie the game came on Eric Bledsoe's shot from the right corner. The two-point attempt was long, sending Phoenix to its fourth straight loss despite a late rally that had pulled the Suns even.

Marc Gasol led Memphis with 22 points, while Lee scored 13 of his 18 points in the fourth quarter.

Bledsoe led the Suns with 23 points.

Dallas' Matthews scored 28 of his season-high 36 points in the second half to steer the Mavericks to a 116-104 win against Washington.

He hit 10 3-pointers overall and eight in the second half.

Dirk Nowitzki had 19 points for Dallas, which took the lead early in the third quarter and pulled away in the fourth.

John Wall led Washington with 28 points but injured his right leg in a collision and was helped off the court with 1:14 left. The injury-plagued Wizards had just 10 players available.

Oklahoma City's Russell Westbrook had his third triple-double of the season with 19 points, 10 assists and 11 rebounds as the Thunder left it late to overrun Sacramento and win 98-95.

Los Angeles' Kobe Bryant was cheered by Detroit fans in his last game at the Pistons, but came out on the losing side as the hosts won 111-91 to extend their winning trot to four games.

Comments
Topics mentioned in this article
Golden State Warriors Brooklyn Nets NBA
Get the latest updates on IPL 2021, IPL Points Table , IPL Schedule 2021 , live score . Like us on Facebook or follow us on Twitter for more sports updates. You can also download the NDTV Cricket app for Android or iOS.