Marc Gasol had 15 points and 14 rebounds, Rudy Gay scored 14 points and the Memphis Grizzlies beat the Philadelphia 76ers 89-76 on Tuesday. 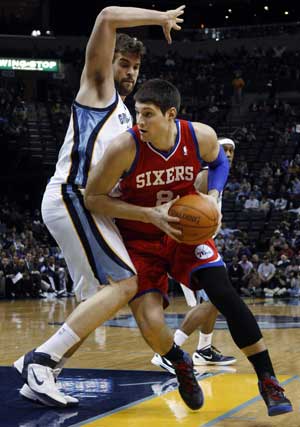 Marc Gasol had 15 points and 14 rebounds, Rudy Gay scored 14 points and the Memphis Grizzlies beat the Philadelphia 76ers 89-76 on Tuesday.

O.J. Mayo added 13 points and Marreese Speights had 12 to help the Grizzlies (19-15) move a season high-tying four games above .500. Gasol, who's headed to this weekend's All-Star Game in Orlando, finished three assists shy of a triple double.

Jrue Holiday scored 22 points - none in the fourth - for the Atlantic Division-leading Sixers, who shot just 37 percent while losing their fourth straight and sixth in their last eight. Rookie Lavoy Allen had 14 points for Philadelphia, and Andre Iguodala added 11 on 5-of-14 shooting.

Comments
Topics mentioned in this article
NBA Rudy Gay Philadelphia 76ers Marina Erakovic
Get the latest updates on SA vs IND 2021-22, check out the Schedule and Live Score . Like us on Facebook or follow us on Twitter for more sports updates. You can also download the NDTV Cricket app for Android or iOS.