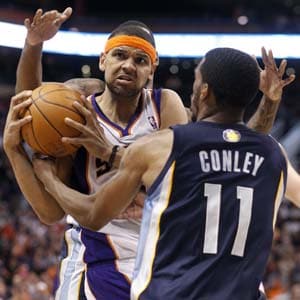 Marcin Gortat added 15 points and nine rebounds for the Suns, Grant Hill had 14 points, Steve Nash and Robin Lopez scored 11 each, and Channing Frye had 10. Nash also had 15 assists. Phoenix's home winning streak is its longest since winning the final eight home games of the 2009-10 season.

Marc Gasol had 21 points and Rudy Gay scored 19 on 7-for-20 shooting for Memphis. The surprising Grizzlies, one of the top teams in the Western Conference, were 4-0 since the All-Star break and had won five straight overall.

Comments
Topics mentioned in this article
NBA Marina Erakovic Phoenix Suns
Get the latest updates on Olympics 2020, Olympics 2020 Medal Tally, Live Cricket Score . Like us on Facebook or follow us on Twitter for more sports updates. You can also download the NDTV Cricket app for Android or iOS.