Donald Sterling - team owner of Los Angeles Clippers - has been charged and slammed for allegedly making racist comments. Apart from his life ban, Donald Sterling has also been fined $2.5 million. 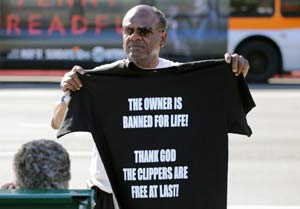 Los Angeles Clippers owner Donald Sterling has been banned for life by the NBA in response to racist comments the league says he made in a recorded conversation.